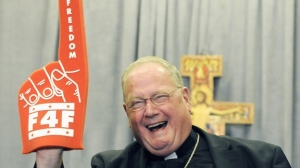 Cardinal Timothy Dolan’s interview with NBC over Thanksgiving weekend sparked controversy after the prelate claimed the hierarchy was not “anti-gay” and had been merely “out-marketed” on marriage equality. Bondings 2.0 pointed out in a previous post how the cardinal’s claims are wrong and called for the US bishops to engage in self-reflection. Below are excerpts from commentary on Dolan’s interview from other LGBT and Catholic voices.

Paul Brandeis Raushenbush, religion editor at The Huffington Post, writes to Dolan with a prophetic reminder that change will, and is, coming from Catholics on LGBT matters:

“What is happening with increasing speed is that Americans do understand the Catholic Church’s position but that people just don’t agree with its conclusions. In fact, even Catholics themselves don’t agree with the Bishops position as polls show a majority of them are for gay marriage…

“The truth is, the Catholic Church, along with most religious traditions will eventually have to change their positions on LGBT people. It will take a long, long time. I certainly don’t expect to live to see the Catholic Church hierarchy change official dogma on the issue. But I have faith that they will.”

Rick Garcia, a Catholic who works with The Civil Rights Agenda, explains why the bishops are perceived negatively by many in the LGBT and allies community:

“The Church is perceived as anti-gay not because it teaches that marriage is between a man and a woman but because its bishops have lied about gay people and our lives, have demonized us and have persecuted priests, Sisters and parishes that minister authentically to gay people and our families.  In addition, some bishops have threatened and tried to intimidate Catholic legislators who support equality and justice for all.

“The Catholic bishops have spent millions of dollars fighting hate crimes legislation and laws banning housing and employment discrimination on the basis of sexual orientation…Most egregious the bishops have threatened to not support the immigration reform bill if it includes same-sex couples.

“The bishops consistently reduce gay people to their genitals and what they do or do not do with them and a number of bishops have supported and promoted dangers programs that seek to change gay people’s sexual orientation.  The bishops have opposed any legislation or policy changes that would affirm gay people’s right to be treated equitably under the law. That is why the Church is perceived as anti-gay. It is not a caricature it is a sad reality.”

Finally, Bryan Cones at U.S. Catholic questions why America’s bishops seem incapable of recognizing goods, though  imperfect in their eyes:

” ‘Blame Hollywood’ is a tried-and-true tactic for losses on the culture war front, but I think the truth on this one is the personal experience of many Americans, Catholics included, of the same-gender relationships in their own family and social circles. And while Dolan may decry the “anti-gay” label that has been applied by many to the Catholic Church, he may want to check in with his brother bishop in Illinois, who responded to same-gender marriage in Illinois with a firebreathing exorcism, blessedly ‘performed’ mostly in Latin. I think most observers would see that as ‘anti-gay.’ …

“Effectively engaging issues of social justice and religious freedom, however, requires something Dolan and his brother bishops seem unwilling to do: accept and expand the good, especially when the perfect is politically out of reach. In both the health care reform and marriage equality debates, the bishops could have grasped the “goods”: a massive prolife victory in the extension of health care in the first, and, in the second, an affirmation of an institution that publicly commits those who enter it to fidelity and stability (albeit an expansion at odds with church teaching). In neither case are the bishops likely to get everything they want, but there are goods to celebrated there nonetheless, and in the case of health care, to be expanded upon.”

On a slightly different note, Jon Stewart of The Daily Show had this to say about Cardinal Dolan’s interview:

“Maybe in this situation it’s not about marketing. Maybe, I don’t know. Maybe the Catholic Church is in this instance in the morally inferior position…”

Croatia Bans Marriage Equality, But There’s More To This StoryUS Bishops Slowly Catching Up to Pope Francis for Synod on Marriage and Fam...
Scroll to top
Loading Comments...
%d bloggers like this: