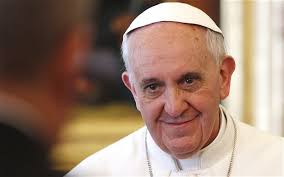 As more people begin to scrutinize Pope Francis’ Apostolic Exhortation, Evangelii Gaudium (The Joy of the Gospel), new details emerge which show that in regards to LGBT issues, the new document shows a complex picture.

The New York Times reports that buried in a footnote to the document is a reference to the U.S. bishops’ 2006 document, Ministry to Persons with Homosexual Inclinations:  Guidelines for Pastoral Care, which promoted the traditional definition of a homosexual orientation as an objective disorder.  The Times reports:

“Nowhere in the document did Francis speak explicitly of homosexuality or same-sex marriage. However, he said the church should not give in to ‘moral relativism,’ and cited with approval a document written by the bishops of the United States on ministering to people with ‘homosexual inclination.’ The pope said the American bishops are right that the church must insist on ‘objective moral norms which are valid for everyone’ — even when the church is perceived by supporters of gay rights as promoting prejudice and interfering with individual freedom.”

This detail is a clearer indication that Pope Francis does not seem inclined to change the teaching on homosexuality.  That notion had been clear since he first started speaking about gay and lesbian issues back in July with his “Who am I to judge?” interview, in which he also did uphold the Catechism’s teaching on homosexuality.  I’ve noted before that it looks like Pope Francis’s road to change in the church won’t be a straight one.

But while in content Pope Francis remains traditional, many people, including myself,  perceive he is opening up a process that will eventually lead to positive developments in church teaching.  For example, Martin Pendergast, a long-time Catholic advocate for LGBT equality in the United Kingdom, offered what he saw as two important selections from the document which point to the possibility of change in the Church, which I had overlooked in yesterday’s post on this topic.

In the first selection, the pope is calling for decentralization of authority in the church:

“Countless issues involving evangelization today might be discussed here, but I have chosen not to explore these many questions which call for further reflection and study. Nor do I believe that the papal magisterium should be expected to offer a definitive or complete word on every question which affects the Church and the world. It is not advisable for the Pope to take the place of local Bishops in the discernment of every issue which arises in their territory. In this sense, I am conscious of the need to promote a sound ‘decentralization.’ ”  (Introduction, section 16)

In the second selection, the pope acknowledges that not all Church teachings hold the same weight:

“All revealed truths derive from the same divine source and are to be believed with the same faith, yet some of them are more important for giving direct expression to the heart of the Gospel. In this basic core, what shines forth is the beauty of the saving love of God made manifest in Jesus Christ who died and rose from the dead. In this sense, the Second Vatican Council explained, ‘in Catholic doctrine there exists an order or a ‘hierarchy’ of truths, since they vary in their relation to the foundation of the Christian faith’.[38] This holds true as much for the dogmas of faith as for the whole corpus of the Church’s teaching, including her moral teaching.” (chapter 1, section 36)

What gives me hope from this document, despite the fact that it does not challenge the traditional teaching on homosexuality, is that there is an openness and humility that seem to get at the core of the Christian message.  Having a pope who is interested in the opinions of the laity, who stresses dialogue and the possibility of change, who stresses diversity and decentralization, who acknowledges the role of science, who seeks to update old traditions can only mean that the road ahead is filled with possibilities.  (All of the items mentioned in the previous sentence were included in yesterday’s blog post on excerpts from the papal document.)

John Allen, writing in The National Catholic Reporter, summarizes what he sees as Pope Francis’ outline for reform, which includes many of the items mentioned above.  Allen writes:

Pope Francis may not be the radical reformer that many have hoped for.  But for those who trust that the Holy Spirit is moving among the laity of the church and who have longed for the possibility of discussion of diversity of opinions, Pope Francis’ project seems to open up a new possibility of hope.

Clearly, this is not the kind of pope that we had gotten used to over the last four decades. And clearly, this new document is complex and layered.  Bondings 2.0 will continue to provide analysis and commentary of this document, especially as it relates to LGBT issues, as we become aware of them.

Lay Consultation Challenges Are A Result of Bishops’ ReluctanceHappy Thanksgiving! For What Are You Thankful?
Scroll to top
%d bloggers like this: