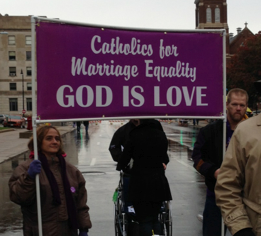 Catholics joined with thousands of other Illinois marriage equality supporters this past week for a March on Springfield,  to support the bill for marriage equality in that state.    A coalition called Catholics for Marriage Equality Illinois showed up stalwartly in rainy weather to let state lawmakers and others know that their Catholic faith urged them to work for legal protections for gay and lesbian couples and their families.

The Catholics for Marriage Equality coalition is comprised of members and supporters of Chicago and West Suburban Call To Action chapters, Faithful of Southern Illinois, Dignity/Chicago, Fortunate Families, and New Ways Ministry.

The fate of the marriage equality bill, SB10, is currently undecided,  The Chicago Tribune noted this about the march:

“The show of force that police estimated at 3,000 people ran up against the political reality that there’s little indication the Illinois House is any closer to approving a gay marriage bill than it was before a summer of lobbying efforts.”

But the newspaper also noted that if the bill does pass the legislature. the Catholic governor of Illinois, Pat Quinn, is prepared to sign it into law.  The article stated:

“Gov. Pat Quinn, a practicing Roman Catholic, has vowed to sign the gay marriage bill if it reaches his desk. . . .  [He] said he decided to support same-sex marriage against the teachings of the Catholic Church as a matter of ‘conscience.’

” ‘I believe everyone of faith should listen to their conscience, and I have in my case,’ Quinn said. ‘The time for marriage equality has come. This is our time. This is our moment.'”

Catholics who were at the event said that the news media generally failed to recognize the strong faith contingent in the demonstration.  Instead, a number of media reports focused on the fact that Springfield’s Bishop Thomas Paprocki refused to allow Catholics who support marriage equality to enter the cathedral to pray the rosary. The Tribune reported:

“Paprocki said the plan by demonstrators to pray for gay marriage amounted to blasphemy, but he noted that ‘our cathedral and parish churches are always open to everyone who wishes to repent their sins and ask for God’s forgiveness.’ “

The Catholics who marched tell another story of how their witness touched and empowered others at the demonstration.  Lena Woltering, of Faithful of Southern Illinois, commented:

“There was good reaction to the Catholic presence.  A young lesbian couple noticed I was holding the Catholics for Marriage Equality sign and asked if I was from Springfield.  I told them I was not and they proceeded to tell me how they had gone to the Springfield Cathedral that morning for Eucharist and throughout the service the priest was very hateful, saying good Catholics should be appalled that the rally was taking place and he encouraged all to attend the anti-gay marriage rally the following day.  They had tears in their eyes as they spoke and thanked us for being visible at the rally.  Quite a few others stopped to thank us for our presence.”

“It was cold and raining in Springfield on Tuesday, October 22nd but standing among the more than 3,000 chanting and cheering advocates of equal marriage we were flooded with warmth and hope and joy and gratitude to be there and to know we will soon see the day that all citizens of Illinois will be able to marry the person they love.”A number of advocates from other mainline faith communities were present and waving their signs and we Catholics appeared to have the largest number of supporters under the Catholics for Marriage Equality and Fortunate Families banners.”The speakers and the great music were rousing and wonderful but the most encouraging aspect of the rally for us was the constant steam of people coming up to talk to us and take photos of us with the banners so we know that we ‘went home’ with hundreds of the marchers and will appear thousands of times on their friends and families’ Facebook pages.

“Some of us strolled among the people in the crowd offering our greetings and giving out the Catholics for Marriage Equality bumper stickers on paint stirrers when they asked, ‘Oo-o! Where can I get one of THOSE?’   Thousands saw that we were there on that important day and were happy to know Catholics from the pews were working with them to bend the arc of history in Illinois toward justice and equality for all.  ”