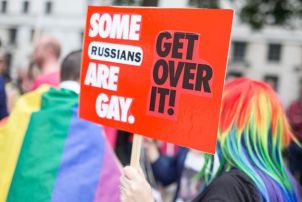 Russia’s passage of anti-gay laws and  discrimination against LGBT people in that nation have made the upcoming Olympic Games in Sochi increasingly controversial. Opinions remain divided over a US boycott, pressuring corporate sponsors, and how LGBT athletes should act while competing.

Catholics lack consensus as well over how to respond to Sochi 2014, but still it seems poignant to explore how faith can inform this debate about human rights, athletic competition, and witnessing to the Gospel.

Catholic leadership is muted on the evolving situation in Russia. The secretary-general of the nation’s bishops’ conference stated the Church in Russia would have no position on either the law banning “homosexual propaganda” or on a potential boycott of the Sochi 2014 Games. CatholicPhilly.com reports that Msgr. Igor Kovalevsky, a Russian Catholic leader, said:

“There are very few homosexuals in our Catholic communities, and we direct our pastoral work at individuals, not groups. But we don’t exclude homosexual people either…”

As for the United States, a conservative extremist group called the Catholic Family & Human Rights Institute has actively supported Russia’s law and the expansion of similar legislation in Eastern Europe, as OutInJersey.net reports. Alternatively, a columnist in The New Yorker cast Pope Francis as the progressive on LGBT issues in his takedown of Russian President Vladimir Putin:

“This is a time in which Pope Francis can ask, “Who am I to judge” gays and lesbians of good will, and have it largely well received among his followers—Putin is the one who is out of step. As the new leader of the Catholic Church acknowledged that gay priests were worthy of dignity, an old autocrat denied that dignity to his own citizens and, come the Olympics, to citizens of the world.”

Michael Sean Winters, a columnist for the National Catholic Reporter  has written about solving the perennial problem of nations with terrible human rights records hosting the Olympic Games. His column contains a detailed history of this record, but in summary Winters states:

“Changing venues at this late stage is never going to happen. And, a boycott would be ineffectual…But, these two remedies miss the larger point: Russia never should have been awarded the Olympic Games in the first place.”

Winters identifies Russia’s long-standing record of abusing human rights against many populations; the LGBT community is only the latest group suffering a crackdown. Why is it, Winters asks, that the participants, administrators, and fans allowed nations like China and Russia to host the Games when their reputations are so well known?

Sochi 2014 is an opportunity for LGBT advocates to reflect on their role in the broader movement for human rights. Winters rightly wonders why it is Russia’s anti-gay law that would trigger a boycott, while past abuses by President Putin were acceptable for the nation to continue hosting the Games. While the struggles for LGBT rights are of utmost importance, this advocacy cannot forget others whose human rights are limited and deprived. Sochi 2014 is a reminder that the Catholic LGBT community must speak out for the rights of others, just as it advocates for its own rights because this is a common struggle for God’s just and equitable reign.

Sochi 2014 also presents an opportunity for unity among Catholics often divided on issue of LGBT rights here in America. Even those who oppose marriage equality or non-discrimination laws can assuredly agree that persecuting people with criminalization and violence because of their sexual orientation or gender identity is an indefensible affront to each person’s dignity. Catholics should urge the Russian Church, the Vatican, and their local leaders to speak out against any and all laws that encourage the persecution of LGBT people.

While the Games will begin next February, it looks like controversies will persist right on through to the opening ceremony.  The period leading up to the Games is an opportune moment for Catholics to raise their voices for LGBT rights and for the human rights of all people in Russia.