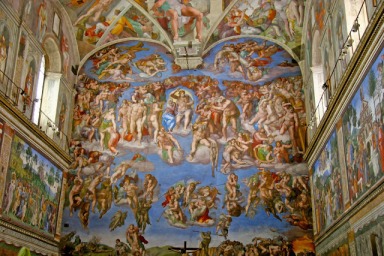 The Vatican’s Sistine Chapel by Michelangelo

Since all eyes interested in Catholic LGBT issues have been on the Vatican lately because of Pope Francis’ recent comments, a sharp news writer in London had decided to look at the Vatican and see just how gay it might be.

No, he was not talking about the infamous “gay lobby” that supposedly operates in the hallowed halls.  He was talking about the art that adorns the famous buildings, and is part of the cultural heritage of the Catholic Church.

Jonathan Jones, art critic for The Guardian, set out to remind the Catholic world that the images which cover the walls and ceilings of various Roman churches and Vatican salons, chapels, and galleries, were, in fact, painted by artists who were gay men.  In an article entitled, “Holy smoke! Take the Catholic church gay art tour,” he suggests that if Pope Francis wants to learn more about gay people, he should just walk around and examine the art:

If Pope Francis wants to think more about this issue, he could do worse than take a tour of churches and galleries in Rome and the Vatican where, for centuries, gay artists have created the glories of the church.

First stop on the tour would be Leonardo DaVinci:

DaVinci’s “St. Jerome in the Desert”

“In the Vatican museum he should contemplate Leonardo da Vinci’s St Jerome in the Desert. An ascetic sits in anguished thought in a rocky wilderness in this unfinished masterpiece. It is a great, introspectively spiritual work of religious art whose creator was well known for his love of young men. Leonardo surrounded himself with good-looking assistants and painted a subversively gay icon of male beauty, his bronzed Saint John the Baptist. When da Vinci was in his 20s, he was formally accused of sodomy.”

Next stop is Michelangelo:

“. . . the Pope might walk into the Pauline Chapel, to look upon Michelangelo’s frescoes there. This chapel is in a private part of the Apostolic Palace not open to the public, but I don’t think the Pope would find entry difficult. There, looking at the suffering of the saints, he might consider how Michelangelo courageously expressed his love for men, even as he created some of the most eloquent art of the church.”

Jones links to another Guardian article, which describes Michelangelo’s sexuality in more depth:

“In the 1530s, when he was in his late 50s, he finally fell in love for real. The object of his desire was Tommaso de’ Cavalieri, a handsome teenager from a noble Roman family. He gave Tommaso presents of poems and drawings – in one of the drawings, Jupiter has taken the form of an eagle to carry off the youth Ganymede.

“The poetry Michelangelo composed for Tommaso has a true fire. It is viscerally real, acutely sensitive: “This, lord, has hit me, since I laid eyes on you. / A bitter-sweet, yes-and-no mood …” He claims that his love is spiritual, that only people with dirty minds think he is up to anything illicit. Yet he is acutely sensual in his longings as he dreams of resting in his lover’s arms, or of being the prisoner of an armed knight – a pun on the name Cavalieri.”

His final example is Caravaggio:

“. . . perhaps the Pope might visit the Roman church of San Luigi dei Francesi to look on this master’s paintings of St Matthew. But the demons of desire cannot be suppressed. The naked male flesh in Caravaggio’s paintings tells its own story. By the time Caravaggio came to Rome in the 1590s, Leonardo and Michaelangelo – not to mention the aptly named Italian painter Il Sodoma – had already blazed a gay trail through the art of the Holy City.”

Jones concludes with some more direct advice to the pope:

Caravaggio’s
“St. Matthew and the Angel”

“It is daft to deny the obvious homoeroticism of Leonardo or Caravaggio, and sophistry to claim that it’s irrelevant to their art. The British Museum is leading the way by drawing attention to the gay content of its collections. The Pope should urge the Vatican to do the same. Let the church take pride in its gay artists.”

I would add that the pope doesn’t have to go back centuries to appreciate the ways that the church has benefited from the artistic gifts of LGBT people.  He just needs to look into any parish church where LGBT people worship, and he will see many contributions to music, environment, liturgy, and decoration.  If he looks closer, he will see the many other contributions that LGBT people bring to the church: a sense of justice, an appreciation of the connection between sexuality and spirituality, a deep concern for appreciating God’s love for every individual.  He will see these gifts alive in ministries of education, worship, social justice, and the works of mercy.

In his so far brief papacy, Pope Francis has already exhibited more awareness of gay people than any previous pope.  May the art which surrounds him in his new home inspire him to find the beauty of LGBT lives of faith as they are lived in our church today.