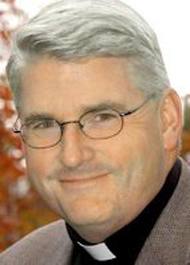 Thanks to blogger Michael Bayly of The Wild Reed, we learned about a Seattle, Washington pastor who announced in his parish newsletter “Why Am I In the Parade?”   Father John D. Whitney, SJ, of St. Joseph’s parish, Seattle,  introduced the explanation of  his participation by referring to Acts 10: 28:

“You know that it is unlawful for a Jewish man to associate with, or visit, a Gentile, but God has shown me that I should not call any person profane or unclean.”

This passage occurs in the story of St. Peter visiting the home of Cornelius, a Roman centurion.  Fr. Whitney explicates the meaning:

“The head of the apostles is called to testify that God’s grace is greater than the members of the Church can hope or imagine, and that their understanding of the Church must continue to develop as the mystery of God’s redemptive love continues to be revealed in all of nature and in every culture. What surprises Peter, what will become a starting point for Paul, and what continues to challenge the Church even today is how vast the mercy of God is, a mercy that denies the notion that anything which is human can be profane; a mercy that encompasses every human heart, every aspect of human nature.”

Fr. Whitney reminded parishioners of the parish’s participation in last year’s Pride parade and what that meant to them:

“Last year, for the first time, members of the St. Joseph community marched in the Pride Parade to indicate our solidarity with and respect for our homosexual sisters and brothers. Like Peter entering the house of Cornelius, it was a moment that would be considered unlawful and scandalous to those who see members of this community as profane or unclean; yet, for me, and I believe for others who chose to be present in this march, it was a moment of grace, when we could witness the power of the Holy Spirit moving in this community, so often alienated from the Church of Christ.”

Fr. Whitney closes the essay with an eloquent expression of why he chose to march this year:

This year, I am going to the Pride Parade again, and I have supported St. Joseph’s presence in it, as well. I have done so not out of opposition to anyone; but, rather, in support of the sisters and brothers of our community who seek to live faithfully in the way that God has made them and the Spirit has called them. I am going to support the mothers and fathers, the sisters and brothers, the friends and companions of our gay and lesbian parishioners, who have pride in their daughters and sons and
who long to have them feel loved and welcomed at the  table of Christ and in the body of the Church. I am going to evangelize, to bear witness, by my presence and, if needed, by my words, that the Catholic Church, founded by Christ, is not a place of hatred and rejection; but a communion of loved sinners called in humility to grow and learn through the grace of the Holy Spirit. I am going to the parade because I want to enter the house of Cornelius, where I have already seen the signs of the Spirit;
because I want those in whose very nature is God’s blessing, to know that Christ longs for them with mercy and with love, asking them not to hide or reject their natural identity, but to see in that identity a way home to God.

Fr. Whitney was one of about a dozen Seattle Archdiocese parishes who last year chose not to collect signatures to put the state’s marriage equality law up for a referendum. 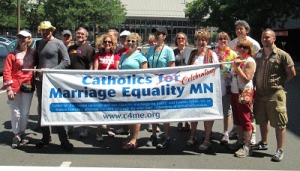 Also on The Wild Reed, Michael Bayly also wrote up an account of the Pride Festival in the Twin Cities of Minnesota, describing Catholic participation at the event.  Though last year Bayly organized “Catholics for Marriage Equality” in the state,  this year, the group edited its name to “Catholics Celebrating Marriage Equality,” reflecting that the state recently adopted a marriage law for gay and lesbian couples and the Supreme Court’s recent decisions.

Similarly, Dick Bernard, who blogs for the Twin Cities Daily Planet, reflected on the role of Catholics in the state’s marriage equality debates.  He noted that on the day of the Pride Festival, his parish,  the Basilica of St. Paul, prayed  “for respect for all people [including their] sexuality.” 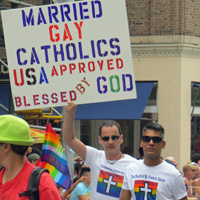 Regular readers of Bondings 2.0 will be familiar with the case of Nicholas Coppola, the New York parish volunteer dismissed from his ministries because he married his partner, David.

The couple marched this year in New York City’s Pride Parade and their photo was featured on The Huffington Post.   The article accompanying their photo is entitled “10 Signs Displayed in the 2013 NYC Pride March That You Should Read and Remember.”  Number five on that list is “Married Gay Catholics USA.”  Noting the strong support for marriage equality among Catholic lay people, author Murray Lipp remarks:

“It is important for gay Catholics to speak openly about their marriages and for straight Catholics who support equality to continue to speak up both within and outside of the church.”

All three examples–Seattle, the Twin Cities, New York–show the power and importance of witnessing for Catholic support of LGBT equality.