DignityUSA, a national organization of LGBT Catholics, met in convention last weekend in Minneapolis to reflect on the theme of “Let Justice Flow Like a River.” 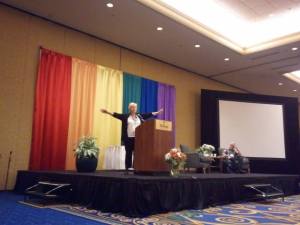 Convention keynoter and National Catholic Reporter blogger, Sister Maureen Fiedler, SL, recently wrote about how the “justice” theme was woven throughout the meeting:

“This year, the planners clearly wanted members to connect the quest for LGBT justice and other struggles for justice. Thus, I was invited to keynote the conference by speaking on the social teaching of the church, raising themes of economic justice, world peace, nondiscrimination, the rights of immigrants, gender equality and respect for Earth.

“Jaime Manson (of NCR fame!) gave a marvelous address on the ‘intersections of justice.’ The idea is that issues of justice cannot be separated; they must “roll down like a mighty stream.” She joined everyone at the conference in cheering the Supreme Court decisions overturning DOMA and Prop 8 in California. But she said she did so with a heavy heart because of the SCOTUS decision the day before that gutted a key provision of the 1965 Voting Rights Act. She praised DignityUSA groups in Minnesota who realized in November they had to oppose not just an amendment to their state constitution that would have banned same-sex marriage but another amendment also on the ballot restricting voting rights. For the record, both amendments lost, a victory for justice.”

As part of the justice theme,  New Ways Ministry’s Executive Director Francis DeBernardo and DignityUSA’s Program Manager Jim Smith presented a workshop on how to organize Catholics on justice issues.

In an article in Lavender Magazine preceding the convention, Smith explained a dilemma that many Catholics face:

“GLBT Catholics and progressive Catholics in general get hassled from both sides of the holy water font. One one side, from some non-Catholics and former Catholics who wonder aloud–quite reasonably enough–why queer and progressive people would keep the ‘Roman Catholic’ when it appears Rome and its local representatives would rather they take up space in somebody else’s church. On the other side, from many within the Catholic church hierarchy and some in the pews who in fact do want the queers gone for good.

“But whose church is it anyway? Many Roman Catholics, including scores of thousands in Minnesota, understand that when they first got their head wet at that above-mentioned font, they were baptized to one day own their faith, follow the Jesus of the Gospels, and let a well-informed conscience be their guide. Sometimes that means  keeping the “Catholic” while standing up and speaking truth to power.  And that they did, in Minnesota last year and this, and in very Catholic states like Rhode Island, Maryland, and Delaware.”

In the same article,  Convention Chair Martin Grochala explained the organization’s hopes for the meeting:

“Attendees will return home with skills for addressing injustice in their communities and with a clear understanding of what have been proven to be successful advocacy strategies.  The work at this conference will be rooted in an understanding of Catholic social justice teaching through the lens of the LGBTQ experience. We will ask attendees to look seriously at justice issues in their communities -in both the LGBTQ and broader civic and religious communities.”

At the convention’s dinner dance,  DignityUSA honored Fr. Roy Bourgeois with their “Risk Taker and Justice Maker Award.” Bourgeois, the founder of  School of the Americas Watch was ejected from the Maryknoll community because of his strong suppport for the ordination of women.

The convention received sad news on its third day when members learned that a past president of DignityUSA, James Bussen, had died of cancer. A long-time national and local leader in Chicago,  Bussen had served as president from 1985-1989.  A Windy City Times obituary recounted his many accomplishments,  and offered the following praise from Chris Pett, president of Dignity/Chicago: 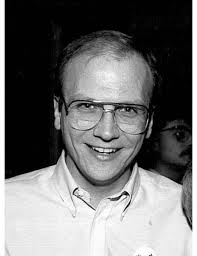 “He was a prophet and courageous presence who could effectively challenge and demand accountability from Catholic church leadership to recognize the dignity and inherent blessedness of God’s LGBT people. But he also could, with gentleness and prayerful discernment, call the local and national Dignity communities, and others who share our mission, to claim respect for our lives and loves, while remaining faithful to God’s call for us to live generously, justly and with total love for one another. We can only hope and trust that his legacy will continue to inspire people of faith within our movement, and those around us, to seek justice and continually speak truth into action.”

The next DignityUSA convention, which is held every two years, will be in July 2015 in Seattle.

QUOTE TO NOTE: Don’t Be Ashamed to Come Out Catholic Pastor Explains Why He Marched in Pride Parade
%d bloggers like this:
Scroll to top