Last week Pope Francis issued his first encyclical.  Whether it had anything to do with LGBT issues seems to be a matter of interpretation.

Pope Francis’ encyclical, entitled Lumen Fidei (Light of Faith), is really a joint encyclical with Pope Benedict XVI who had begun to write it, but did not finish it before he resigned the papacy earlier this year.  Before we look at how the encyclical may or may not touch on LGBT issues, it’s important to take note of this encyclical’s unique authorship.  British theologian Tina Beattie, a strong supporter of LGBT equality, commented in a Tablet blog post on the unique authorship of this document:

“It asks to be read, not as the first encyclical of a pastoral Pope who represents the advent of global Catholicism, but as the last intellectual flourish of a European papacy insulated from the complex realities of modernity by its baroque institutions. Beautifully crafted and erudite, it is an eloquent and fitting elegy to that great tradition. It is also highly idealistic about the Church and deeply pessimistic about post-Enlightenment western society which is the focus of its concerns – its author being apparently oblivious or indifferent to the world beyond that context which has already taken the Vatican by storm. . . .One searches almost in vain for the hand of the Argentinian pastor whose signature it bears. . . .

“We still await the first encyclical by a pope who represents the dynamism and plurality of a global Church, who writes not with rings on his fingers but with dirt under his fingernails, whose theology emerges not from the books he has read but from the people he has encountered in the streets and alleys where the poor are to be found.” 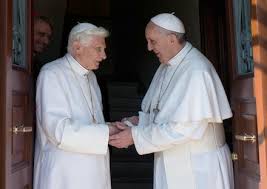 So whatever one might have to say about the encyclical, one needs to be cautious in attributing too much of it to Francis’ mindset, which seems, at least to Beattie, to be absent from the text.

One paragraph in the encyclical (section 52) did capture the attention of the some of the press.  Here it is:

“In Abraham’s journey towards the future city, the Letter to the Hebrews mentions the blessing which was passed on from fathers to sons (cf. Heb 11:20-21). The first setting in which faith enlightens the human city is the family. I think first and foremost of the stable union of man and woman in marriage. This union is born of their love, as a sign and presence of God’s own love, and of the acknowledgment and acceptance of the goodness of sexual differentiation, whereby spouses can become one flesh (cf. Gen 2:24) and are enabled to give birth to a new life, a manifestation of the Creator’s goodness, wisdom and loving plan. Grounded in this love, a man and a woman can promise each other mutual love in a gesture which engages their entire lives and mirrors many features of faith. Promising love for ever is possible when we perceive a plan bigger than our own ideas and undertakings, a plan which sustains us and enables us to surrender our future entirely to the one we love. Faith also helps us to grasp in all its depth and richness the begetting of children, as a sign of the love of the Creator who entrusts us with the mystery of a new person. So it was that Sarah, by faith, became a mother, for she trusted in God’s fidelity to his promise (cf. Heb 11:11).”

The Advocate, a leading U.S. LGBT publication, interpreted the passage in this way:

“Pope Francis and his predecessor, Benedict XVI, have issued an unusual collaborative document in which they restate the Roman Catholic Church’s opposition to same-sex marriage.

“The 82-page encyclical, issued today, says marriage should be a ‘stable union of man and woman.’ It continues, ‘This union is born of their love, as a sign and presence of God’s own love, and of the acknowledgement and acceptance of the goodness of sexual differentiation.’ “

The Australian press outlet, News.com.au, offered the headline:  ”Popes have no faith in gay marriage,” yet the story does not mention gay marriage at all.  Perhaps because there was no mention of gay marriage in the encyclical?

The New Civil Rights Movement also headlined their story on the encyclical sensationally:  “First Encyclical By Pope Francis Continues Benedict’s Holy War On Same-Sex Marriage.”   Yet, this source, too, offers no citation of a reference to same-sex marriage in the encyclical.

London’s The Daily Mail focused on the marriage paragraph, featuring the headline: “Pope uses papal encyclical to affirm the importance of the ‘stable union of a man and a woman’ as gay marriage debate rages round world.”  The article begins:

“Pope Francis issued his first encyclical today to reaffirm the importance of sex between a man and a woman in a clear sign that the Catholic Church’s tough stance on gay marriage remains unbowed.

“The Catholic Church has come under increasing pressure in recent months to relax its hardline view against same-sex marriage as the gay rights movement gathers pace across the world.

“But today’s teaching, a meditation on faith that was produced from a draft begun by his predecessor Pope Benedict XVI, was his first clear statement as pope that marriage should be a union between husband and wife with the aim of creating children.”

The problem with this type of analysis is that it makes it seem as though the pope went out of his way to condemn marriage equality and that he did so harshly.  Given the heightened rhetoric against LGBT issues during the papacies of John Paul II and Benedict XVI, I think Francis’ remarks on heterosexual marriage in this document are rather tame.

The singling out of the marriage paragraph–only one from an 82-page document–makes it seem that the purpose of the encyclical was to comment on marriage equality efforts.  Actually, the encyclical is about the role of faith in the modern world.

Blogger Michael O’Loughlin thinks the news emphasis on the encyclical’s comment on marriage was unbalanced.  Of the encyclical paragraph cited above, he writes:

“With Pope Francis, it’s not yet clear how he’ll approach the subject of marriage. So far, he hasn’t said much. This in itself is a huge improvement from his predecessor. If those of us who support same-sex marriage want to find conflict, I suppose the passage above could be interpreted in such a way. But given that two of the four hands who wrote the document were attached to a pope whose hostility toward gay people was quite evident during his reign, I’ll hold off a bit and wait for Francis’s own words. I suspect we’ll continue to be pleasantly surprised in his pastoral approach to his papacy, including, hopefully, on issues important to LGBT people and their allies.”

While it is true that eliminating the paragraph on marriage would have been more LGBT-friendly,  I don’t think that its inclusion is a strong indicator that Francis will be a hardliner on marriage issues.  There is no “smoking gun” here.