The archbishop of New Orleans made a short statement recently that speaks volumes about how far the Catholic Church–and the greater society–has come in the past 40 years with regard to LGBT issues. 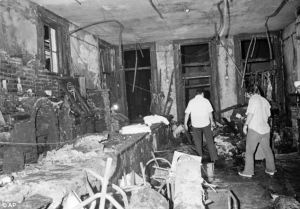 UpStairs Lounge after the fire.

This past weekend marked the 40th anniversary of a fatal fire in a New Orleans gay bar, The UpStairs Lounge, that claimed the lives of 32 people, and dozens more critically injured.  Because it was started by arson, the event is considered the largest mass murder of gay people in U.S. history, according to The Daily Mail.

In 1973, Archbishop Phillip Hannan, the powerful head of the New Orleans archdiocese, did not say a word about the tragedy, not even an expression of sympathy and support for victims and families.  Neither did New Orleans mayor Moon Landrieu, and many other city leaders.

40 years later Archbishop Gregory Aymond of New Orleans has issued an apology for the church’s silence in 1973.   In an email to Time  magazine, which recently carried a story about the fire, Archbishop Aymond stated:

“In retrospect, if we did not release a statement we should have to be in solidarity with the victims and their families. The church does not condone violence and hatred. If we did not extend our care and condolences, I deeply apologize.”

A simple statement, but one that reflects how much times have changed.  Other details of the event recall the oppressive environment that gay and lesbian people suffered just 40 years ago.  According to The Daily Mail:

“Out of fear and shame, some family members of the deceased refused to claim the ashes of their ‘loved’ ones. 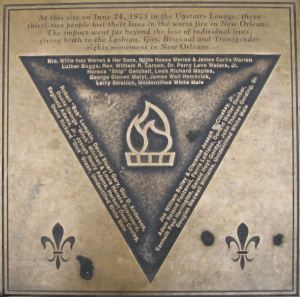 A plaque that is now at the site of what was the UpStairs Lounge in 1973.

“On the issue of identifying the victims, Major Henry Morris, a detective with the New Orleans Police Department said, ‘We don’t even know these papers belonged to the people we found them on. Some thieves hung out there, and you know this was a queer bar.’

“Churches were either silent or subtly suggested the victims deserved what they got, most refused the use of their facilities for a memorial service.

“Father Bill Richardson of St. George’s Episcopal Church, however, believed the dead should have a service.

“He graciously allowed, over the protest of many parishioners, the use of St. George’s sanctuary for a prayer service, which was attended by roughly 80 people.

“He was subsequently chastised by his bishop and received no small amount of hate mail. Days later a Unitarian Church also held a small memorial service.

“A larger service was held on July 1 at St. Mark’s United Methodist Church on the edge of the French Quarter.”

In addition to the current archbishop making up for the errors of one of his predecessors, the current mayor of New Orleans, Mitch Landrieu, is making for the negligence of the former mayor who was his father by issuing a commemorative proclamation.

While we pray for the victims and their families at this sad milestone, we pray in gratitude for Archbishop Aymond’s acknowledgement and apology.  We pray, too, that the entire Catholic Church–hierarchy and laity–will work together so that events like this tragic one will never happen again.