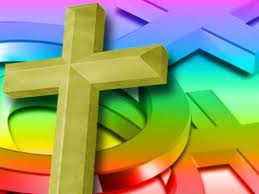 The Pew Research Center released a report last week about a survey they conducted of LGBT people in the United States, including their participation and attitudes toward religious institutions.  The major finding, which grabbed the headlines, is that LGBT people find religious institutions unfriendly towards themselves, and many are alienated from these organizations.

A Religion News Service article which appeared on The Washington Post’s “On Faith” blog highlighted the following findings:

“Gay Americans are much less religious than the general U.S. population, and about three in 10 of them say they have felt unwelcome in a house of worship, a new study shows.

“The vast majority said Islam (84 percent); the Mormon church (83 percent); the Roman Catholic Church (79 percent); and evangelical churches (73 percent) were unfriendly. Jews and nonevangelical Protestants drew a more mixed reaction, with more than 40 percent considering them either unfriendly or neutral about gays and lesbians.”

Those statistics are not very good for Catholics.  It shows that we have a terrible image problem in terms of how LGBT people perceive us.  Marianne Duddy-Burke, executive director of DignityUSA, in a HuffingtonPost blog noted the difficult challenge that this presents our church:

“The Pew Survey should serve as a wake-up call to Catholics — not only those supportive of LGBT equality but all those who in conscience disagree with the bishops on a broad range of issues related to gender and sexuality, from women’s ordination to birth control. We need to grapple with the fact that our bishops are defining Catholicism in a way that is directly opposed to what most Catholics believe and want our church to be. We have a worse brand-identity issue than J.C. Penney!”

The Washington Post story offered the perspective or Ross Murray, director of faith and news initiatives at GLAAD (Gay and Lesbian Alliance Against Defamation) who suggested a reason for the negative attitudes LGBT people have of religion:

“[Ross Murray] thinks the sense of unfriendliness comes in part from the loudest voices of faith speaking through an anti-gay frame. Religious groups that support gays and lesbians, as a GLAAD study found last year, get far less media attention.

The statistics for how unwelcome LGBT people feel by religious institutions are staggering.  The Washington Post article states:

“Almost 50 percent of gay, lesbian, bisexual and transgender adults say they have no religious affiliation, compared to 20 percent of the general population. One-third of religiously affiliated gay and lesbian adults say there is a conflict between their faith beliefs and their sexual orientation or gender identity.”

And for Catholic LGBT people, a super-majority of them feel unwelcome.  The Deseret News reports:

“Among LGBT Catholics, two-thirds (66 percent) say the Catholic Church is unfriendly toward them. . .”

Clearly, religious people have their work cut out for them if they want to make sure that LGBT people feel welcome in their communities.  Duddy-Burke offered some suggestions:

“There are many options for Catholics troubled by the findings of the recent Pew survey. Most effective would be ensuring that anytime a church leader says something untrue, unkind or unwarranted about LGBT people; fires someone due to sexual orientation, gender identity, marital status, or an expression of support for LGBT people; or takes a position on a public matter that upholds institutional discrimination, call him out on it. Let him and others know that he is speaking only for a minority of Catholics.

“If you know LGBT people in your parish or faith community, tell them you’re glad for their presence and gifts. Ask if they find the community supportive, or if they find anything that happens there discomforting. If a priest delivers an anti-gay message, let him know you find it problematic, given Jesus’ model of broad inclusion.”

GLAAD’s Murray also offered some hope for the future by noting in The Huffington Post:

“I think that relationship is going to mend, but it will happen slowly … I hope that inclusive faith communities are able to get their message out even better, so that there can be better trust between LGBT people and religion.”

At New Ways Ministry, we see the relationship between LGBT people and the Catholic church developing every time we add a new parish to our gay-friendly parish list or a new campus to our gay-friendly Catholic college list.  But the Pew Report reminds us how much work we still have ahead of us.