Though debates about marriage equality here in the United States can become quite heated at times, in France the discussion of this topic has inspired warnings about violence, threats of violence, and violence itself. 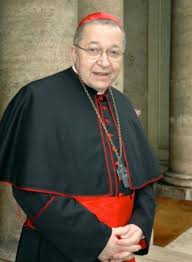 The latest episode in this regard has been the Archbishop Of Paris’ warning that if marriage equality becomes law,  society may erupt with violent protests.  According to a Reuters news report:

“Cardinal Andre Vingt-Trois told a meeting of French bishops the planned marriage reform, which the government has speeded up amid mounting pressure from opponents, was a sign that society had lost its capacity to integrate different views. . . .

” ‘This is the way a violent society develops,’ he told the spring meeting of the French bishops’ conference. ‘Society has lost its capacity of integration and especially its ability to blend differences in a common project.’ “

On the secular side, a leader of the anti-marriage equality movement also warned of violence this week.  LGBTQNation reports that Frigide Barjot, a French comic who is a leader in the movement against marriage equality commented on the French Senate’s passage of the bill and the decision to now move the debate to the National Assembly:

“This is a disgrace. The French people don’t want this law, and what do they do? They speed up its passage. (French President Francois) Hollande wants blood, and he will get it. We live in a dictatorship. The President of the Republic has guillotined us.”

Such rhetoric only incites the already violent motivations of some protesters.  PinkNews.co.uk reports:

“On Wednesday thousands of protesters swarmed in Paris to voice their opposition to the bill, with some attacking cars and public property, and lashing out at police and journalists, reports France24.

“11 people from the protest were detained for questioning, while 24 pro-equal marriage counter-protesters were arrested, according to police.

“During the night four men were detained after they attacked a gay bar in Lille, injuring the manager and causing property damage.“

“Earlier in the week, gay rights activists pointed to last weekend’s attack on a gay couple in Paris as evidence of their claim that homophobic acts have tripled nationwide over opposition to the marriage equality law.

“Wilfred De Bruijn was beaten unconscious near his home early Sunday in central Paris, sustaining five fractures in his head and face, abrasions and a lost tooth.”

Catholic leaders in France would do better to forthrightly condemn such acts of violence, instead of simply warning that violence may be an outcome.  Warning about violence seems designed to inspire fear about the marriage equality bill, which the French bishops oppose.  But warning about possible future violence is a weak response if there is no condemnation of the violence which is already occurring during this debate.  Catholic leaders should be peacemakers, not fear-mongers.