Students at The George Washington University (GWU), in Washington, DC began a campaign last week to institute changes in how the University administers its spiritual care programs, after some complained about anti-LGBT comments from Fr. Greg Shaffer, the Catholic chaplain who administers the University’s Newman Center.

Blake Bergen and Damian Legacy were once active members of the Newman Center at GWU who say they left due to Fr. Shaffer’s anti-gay stance that they say many others considered abrasive and polarizing as well.

In an essay in The Huffington Post, Bergen and Legacy further explain their reasoning in asking for an overhaul of GWU chaplaincy policies. Aware of the tension inherent to respecting religious freedom and free speech at a secular college where diversity abounds, they nonetheless oppose the Newman Center’ messaging:

“[Fr. Shaffer] has a long history of inflammatory comments towards LGBT people in his homilies and fostering a homophobic atmosphere amongst Catholics, and continued his persecution of the LGBT Community last week. While normally a sense of professional respect is observed – as neither of us are Roman Catholic priests- the idea that the Newman Center is entitled to do and believe as it pleases was violated when comments were published on his personal blog and in the student newspaper saying:

“‘Every single rational person knows that sexual relationships between persons of the same sex are unnatural and immoral. They know it in their hearts,’ Shaffer wrote. ‘And, yet, they go against what their hearts tell them when they try to argue for same-sex relationships and ‘gay marriage.’

“While this is simply a taste of the language and sentiments that permeate the Newman Catholic Student Center, the atmosphere spreads to affect those who do not even identify with the center, faith, or seek Father Greg for spiritual advice in the wider University community.” 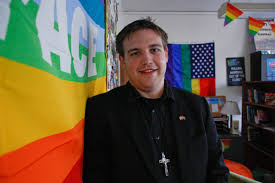 “The former Newman Center members are creating a video with testimony from 10 other Catholic students, who cite Shaffer as the reason they left the chapel…Legacy and Bergen also plan to file a formal complaint with the University and hold prayer vigils outside the Newman Center until Shaffer is removed.

“The students lambasted Shaffer’s counseling sessions, in which he said he advises students who are attracted to members of the same sex to remain celibate for the rest of their lives. They also criticized the priest for a fiery blog post he wrote last May, calling gay relationships ‘unnatural and immoral’ after President Barack Obama came out in support of same-sex marriage…

“Aside from the appeal to GW, Legacy and Bergen will also send letters to D.C.’s Roman Catholic archdiocese, who heads the Church for the entire District and is responsible for choosing priests’ assignments. Legacy will also ask the Student Association to defund the Newman Center as part of the SA’s annual allocations process to organizations April 15. This year, the Newman Center received $10,000 from the SA, which divvies up funds from a budget accumulated through student fees.”

GWU administrators are reviewing complaints filed by Legacy in the Office for Diversity and Inclusion.  They are also reviewing it in the Multicultural Student Services Center, comparing GWU’s policies with other comparable institutions on how chaplaincies are admitted, administered, and overseen to remain in line with the University’s mission. No comments on potential changes or a request for Fr. Shaffer’s removal from the University have been released.

As a reaction to the campaign led by Bergen and Legacy, conservative students and other supporters of the Newman Center have labeled this a matter of ‘persecution’ of Fr. Shaffer for his views.

In response to these charges, Bergen and Legacy are open about their true intentions and goals:

“Let us be clear, we are not attacking the Roman Catholic Church. We are by no means asking the Church to change its views on same-sex marriage, nor are we seeking validation or celebration of our sexuality by the Church, or anyone for that matter.

“What we ask is to be treated with dignity and respect at our university. We ask that the Chaplain of the George Washington University Newman Catholic Student Center, a man charged with the pastoral care of students by a non-university entity, treat each of us with equal love and value. We ask that our university provide a safe and welcoming environment for every student.

“Can we not agree that our students should be safe in schools and that all bullying should be stopped? Furthermore, as an institution dedicated to acceptance and inclusion should GW not be called to take steps to stop homophobic bullying along with all other forms of bullying? We might not all agree about full celebration and inclusion of LGBT civil rights, but we can all agree that bullying should be considered unacceptable, especially from our spiritual leaders.

“We have been criticized for waging an intolerant attack on civil liberties by speaking out against a religious leader for espousing discrimination and anti-LGBT rhetoric. Hate in God’s name is hate, not religion.”

As the campaign continues at GWU, Bondings 2.0 will update our readers on any developments.

Irish Bishops Threaten Action if Marriage Equality is Passed Did the Archbishop Exclude Pro-Marriage Equality Catholics from Communion? Only...
Loading Comments...
%d bloggers like this:
Scroll to top