Easter Sunday morning turned out to be an opportunity for senior Catholic clerics to hit the airwaves with messages about LGBT issues.  Not a surprise, given the fact that the Supreme Court heard two cases this past week about marriage equality.

Yesterday, we reported on New York’s Cardinal Timothy Dolan message of pastoral outreach to lesbian and gay Catholics. We urged him to open a dialogue with lesbian and gay people as the way to follow through with his suggestion that church leaders need to listen better to those who feel alienated from the church.  Cardinal Dolan also took the opportunity to defend the hierarchy’s view that marriage should be reserved for heterosexual couples.

Washington, DC’s Cardinal Donald Wuerl also made a television appearance yesterday in which he discussed welcoming lesbian and gay people, but his outreach was a little more restrained.  Speaking on Fox News Sunday,  Wuerl was asked if the Catholic church should welcome gay and lesbian couples who are legally married.  His answer, according to the news website Rawstory, was:

“. . . we do that same thing with people who are married, divorced and remarried.  We say, you know, you’re still part of the family, but we can’t recognize that second marriage. It’s never been a great problem. It’s painful for all of us to have to realize that making our way through life is difficult and that we can’t always be as perfect as we like to be.”

Cardinal Wuerl should check with remarried people to see if, in fact, they feel as welcomed by the church as he thinks they should be.

Wuerl also used his television appearance to make a quasi-religious liberty argument, saying that those who, like himself, oppose marriage equality need to be tolerated better by society: 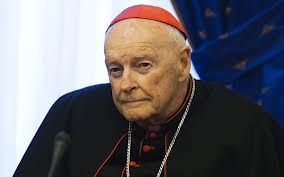 “Cardinal McCarrick said he has ‘no problem’ with civil unions for gay couples that confer the same rights as marriage.”

“I certainly would prefer that to what I could call ‘a marriage,’ in quotes,” Cardinal McCarrick said.

McCarrick joins a growing chorus of bishops, including Pope Francis who have endorsed civil unions as an alternative to marriage–a compromise that was unthinkable only a few years ago.

“ ‘Same-sex marriage is not at this point prevalent in our society, and probably won’t be’ because gays are a minority, McCarrick told Bloomberg. Children whose parents divorce or are born out of wedlock, he said, ‘find themselves out on a limb,’ which ‘is a serious problem in our society.’ ”

Cardinal Dolan to Lesbian and Gay Catholics: “I love you, too. And God... CAMPUS CHRONICLES: Gay Students’ Elections Signal Shift in Catholic Colleges’...
%d bloggers like this:
Scroll to top