Christian artist Mary Button has created a series of 14 paintings entitled “Stations of the Cross:  the Struggle for LGBT Equality.”   The Believe Out Loud website has made the stations available through their Flickr site, and you can view them here. When you get to the site, click on each image for a full description of the particular station’s symbols and relevance.

Believe Out Loud also contains Mary Button’s artist statement about the series,  of which the following are excerpts:

“Stations of the Cross are a series of artistic representations of the Passion of Christ, depicting the story of his death from his sentencing to the laying of his body in the tomb. The fourteen images are used devotionally during the Lenten season for prayer and reflection.

“The stations provide an opportunity for Christians to enter into the story of Christ’s suffering and experience a relationship with a God who suffers with us.

“This series of stations combine images depicting the struggle for LGBT equality through the 20th and 21st century. Each station illustrates the many ways in which the pursuit of justice for LGBT peoples is embedded in the history of the United States.”

Button describes how reading Clarence Jordan’s Cotton Patch Gospel, which re-tells the Gospel as if it took place in the Jim Crow South, influenced her vision:

“Of his translation of crucifixion to lynching, Jordan writes, ‘Our crosses are so shined, so polished, so respectable that to be impaled on one of them would seem to be a blessed experience. We have thus emptied the term “crucifixion” of its original content of terrific emotion, or violence, of indignity and stigma, of defeat.’ 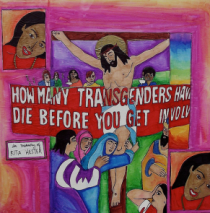 Station 12: Jesus Dies on the Cross — Rita Hester, a transgender woman, is murdered in Massachusetts in 1998.

“Reading an account of Christ’s passion that ends not with Christ nailed to a tree in Judea, but hanging from a noose tied to a pine tree in Georgia, compelled me to begin to re-imagine, re-define, and re-contextualize the crucifixion.

“I believe that we can only begin to understand the meaning of the crucifixion when we take away our polished and shiny crosses and look for the cross in our own time, in our own landscape.

“When we look for the crucified body of Christ in the stories of people on the margins of our societies, then we are able to live the Gospel and not simply read it.” 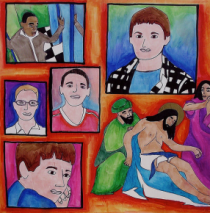 Station 14: Jesus is Laid in the Tomb — Many LGBT youth commit suicide in 2010, sparking a national discussion.

“This year, my stations of the cross take viewers on a journey through the 20th and 21st centuries struggle for LGBT equality. In every decade of the last two centuries, there are deeply troubling and painful examples of the marginalization of LGBT peoples.

“In the sacrifices of martyrs of the LGBT movement, we can come to a new understanding of the cross, and of what it means to be part of the body of Christ.”

New Ways Ministry offers these stations for your prayer and meditation this Good Friday, as we remember Christ’s passion and death.