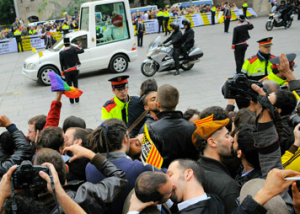 Pope Benedict XVI’s legacy will be fiercely debated in the weeks leading up to his resignation on February 28. Already commentators are reflecting on the pervasive legacy that this Pope leaves regarding LGBT relations within the Catholic Church. Needless to say, not many are positive.

Michael O’Loughlin writing at Religion News Service labels Benedict’s views as “wrong and hurtful” with a lineage of destructive policies aimed at limiting LGBT individuals’ acceptance in the Church. O’Loughlin’s view is that Benedict is an elderly man who has lived sequestered in the Vatican for too long, thus preventing him from a realistic understanding of LGBT people. He writes:

“Benedict seemed unable to grasp that gay women and men long for the same things as their heterosexual peers: loving relationships, lives of dignity, and respect from their fellow human beings. He seemed particularly fixated on the bizarre notion that same-sex marriage would somehow herald the downfall of civilization and he said things that no pastor should ever preach, much less the pope…Benedict’s failure to act pastorally and kindly on these issues remains a great failing of his papacy.”

An article by Lila Shapiro at The Huffington Post recalls the persecution of Sr. Jeannine Gramick and New Ways Ministry faced under the Pope. As Cardinal Ratzinger who headed the Congregation for the Doctrine of the Faith, he oversaw persistent investigations into the public ministry of Sr. Jeannine and New Ways Ministry. Serendipitously, the cardinal and the nun found themselves in conversation on the same airplane at one point, about which Shapiro writes:

“When she boarded the plane, she saw Cardinal Joseph Ratzinger, who later became pope, sitting with two empty seats beside him. She mustered her courage and sat next to him. ‘When he found out who I was, he just smiled and said “Oh, I’ve known about you for 20 years,”’ she said.”

“…he asked her questions about her work, and then she asked him one. ‘I said, “have you ever met any lesbian or gay people?”’ she recalled. He said that he had — at a ‘demonstration of homosexuals’ in Berlin. ‘So that was his idea of meeting gay people,’ she said.”

Shapiro also interviewed acclaimed Jesuit author, Fr. James Martin,  who also identifies this interpersonal aspect as a key factor in predicting whether Benedict’s legacy of anti-LGBT policies will continue in the next papacy:

“‘There could be a change of tone if you get a cardinal who has had experience with gays and lesbians’…By ‘coincidence or providence,’ Martin said, the cardinals may chose someone with a gay family member, or someone who worked at a diocese that had gay outreach.

“‘So much of it is based on experience, in terms of how you even speak about gays and lesbians,’ Martin said. Pope Benedict, he added, ‘did not come to the papacy with a great deal of experience in that kind of ministry.'”

Many reflections will be produced about this anti-LGBT papacy and prospects for the future, but assuredly Benedict will not be remembered for his pastoral nature towards the gay and lesbian community. Shapiro elucidates just how heavily Benedict focused his anti-gay efforts after assuming the papacy:

“In his years as pope, his opposition to gay rights has not faltered. Benedict, a staunch conservative, has said since his appointment that saving human kind from homosexual behavior was as important as saving the rainforest from destruction. He has called same-sex marriage a “dangerous and insidious” challenge to society. In recent months, he sought alliances to oppose efforts to legalize same-sex marriages around the world.”

However, even suffering greatly under Benedict for decades, New Ways Ministry remains hopeful in this time of transition. Shapiro quotes Francis DeBernardo, the ministry’s executive director, on the potential legacy Benedict will have in resigning:

“’Whenever there’s an opportunity for a change, there’s always the hope that the change will be for the better…We need a pope who’s going to listen to the faith of Catholics, whose faith has told them that they should be supporting LGBT people, that they should be respecting the dignity and the human rights that these people have.’

“DeBernardo said he has seen glimmers of such a change from bishops and cardinals in Europe, who have stopped short of supporting same-sex marriage, but have made positive statements about same-sex relationships and civil unions. And while the Vatican remains one of the most powerful opponents to same-sex marriage and other gay rights causes, recent polls have shown that Catholics in the pews mostly support gay rights, with more than two-thirds of Catholic voters supporting legal recognition of same-sex relationships.”

Readers can view New Ways Ministry’s full statement regarding the resignation here and be assured that as commentaries develop and news breaks, Bondings 2.0 will continue to update on this important period in the Catholic Church.