In addition to being among the oldest chapters in the national organization, both are among the strongest chapters, too. 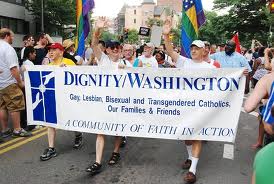 A Washington Blade article recounts some of the chapter’s history:

“Dignity/Washington started with a group of about 20 at its first Mass. It moved from twice-monthly to weekly Mass in 1976. Membership and Mass attendance peaked at about 500 and 350 respectively in the late ‘80s. By late 1990, it had become the largest Dignity chapter in the U.S., a feat it maintains to this day, though membership is now about 200 with an average of 90-100 believers attending weekly Dignity Mass in D.C. “

Sister Jeannine recounted the initial meeting of the chapter which took place “in the cafeteria of the National Shrine of the Immaculate Conception with five others in 1971.”

Tom Bower, a co-chair for the 40th anniversary events reflected in the article on some of the chapter’s purposes:

“The official church would very much like us to disappear. We show that you can be gay and Catholic at the same time and happily so and despite the major efforts of a much bigger organization to throw us out. We’re part of a national organization and when the Pope comes out against something gay, we’re able to say, ‘No, that’s wrong.’”

Bower and Bob Miailovich, another long-time member of the chapter, also commented on the challenge of remaining in the Catholic church as gay men:

“ ‘People think, “Oh, why do you keep banging your head against the wall?’” Bower says. ‘That’s why we call it faith. It’s a belief that there is within the larger view of what it means to be Catholic, there’s something there that you just don’t have with other groups.’

“Miailovich says despite the anti-gay teachings, he still ‘find(s) more truth in the Catholic Church than I do in other religions. It’s not perfect and I don’t buy everything at the end of the day but from what I know of other religions and what they teach and believe, I find more truth on the Catholic side than elsewhere else.’ ”

Miailovich continued in this vein:

“ ‘The church really is the people of God,’ Miailovich says. ‘It’s a horizontal assembly, not some vertical thing where you have the Pope at the top and an triangle going down with everyone else. Out there in the pews, there’s a great deal of support for a more progressive agenda, for women’s ordination, for married priests, you have the nuns on the bus for social justice. Everybody in the church does not believe 100 percent of everything that may be promulgated from on high.’

“He also says there’s an ‘attitude that it’s my church and you can’t take it away from me.’

“ ‘I can’t leave what is mine and that leaves you with a sense that some day, somehow, change will be made. You’re right, there are people who’ve said, “Why spend a lifetime working with these people, let’s go start our own thing and not worry about what’s left behind.” But I’m not going to change. This is who I am. This is how I pray and how I worship and here I am. We pray for our church leaders because we feel they need enlightenment.’ ”

A blog post on Boston.com offers a bit of the origin’s of the Boston chapter: 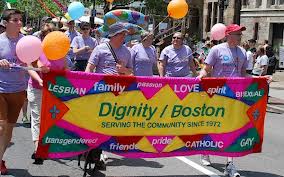 “Dignity/Boston grew out of a short-lived group called Interfaith, started by a local diocesan Holy Cross priest, the late Father Tom Oddo, along with former Holy Cross seminarians Ray Struble and Jim Andrews, and Ralph Fuccillo, among others, according to Struble. Another priest instrumental in Dignity’s growth during the 1980’s until his death in 2005 was the Rev. Dr. Richard Rasi, a priest with the Melkite Catholic rite, who frequently presided at Mass and established a popular ministry in Provincetown.
“The local chapter first met on December 3, 1972, at the Randolph Country Club. The next year, Dignity moved to St. Clement’s Church where it remained until 1977 when the local chapter moved to Arlington Street Church. In 1988, Dignity/Boston moved to St. John the Evangelist Church, located in Boston’s Beacon Hill neighborhood, where it remains today.”

The post also describes the distinguished history of activism and advocacy that the Boston chapter has:

“Politics and religion mixed well in the organization’s early years. ‘Dignity represented —for those of us who were Catholic — our political family, because [secular gays wanted] nothing to do with the religious crowd,’ said Struble. Keep in mind, he continued, ‘Boston was one of the most politicized gay cities in the country and one of the most Catholic.’

‘Dignity gave voice to the political piece that people of faith were trying to get into the public square,’ he explained. ‘We had push back from secularists. We were looked at as compromising.’ ”

‘But politics was only half of the Dignity equation.

“ ‘We took the social action of Jesus’ message to heart to be religious activists. That meant accepting everything, including women at the altar,’ he explained. ‘The sacrament [of the Eucharist] was the affirmation of us as one.’ “

But ecclesiastical and secular politics are not the full picture, as one of Boston’s younger members, Steven Young, points out:

“I don’t think I know God’s will better than anyone else. But I know what I know, and the truth I have about who I should love and whether that is sinful or not. I feel it deeply in my soul that being gay is not wrong [and] that I have to share with the rest of the Church. If people are blind to that—all the more reason for sharing that truth with others.”

Marianne Duddy-Burke, a Boston member, who is also the Executive Director of DignityUSA, agrees:

“ ‘Faith, community, vision, and courage,’ said Duddy-Burke. ‘That’s what we offer to the LGBT movement and the church.’ ”

Like Dignity chapters across the country, these two communities offer vibrant opportunities for spiritual development, community, service, and support.  As Sister Jeannine Gramick said at the close of the Blade article:

“They’ve had a marvelous ministry here for 40 years ministering to local LGBT Catholics. It’s really a time to rejoice.”

And we add our own message to both chapters:  “Ad multos annos!”  (“Many more years!”)