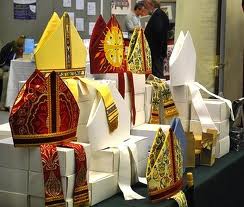 One passage caught my eye in particular.  In the section of the article devoted to reviewing Cardinal Timothy Dolan’s book, A People of Hope:  Archbishop Timothy Dolan in Conversation with John L. Allen, Jr. , McCarraher makes the following observation:

“The galling truth is that many American Catholics—perhaps a majority—do not fully share the bishops’ view of what constitutes the fulfillment of human nature. They do not believe that same-sex intercourse and the use of contraceptives are “unnatural,” and therefore do not see gay marriage or contraceptive coverage as threats to religious liberty.

“Of course many laity are dissenting from the magisterium, and doing so in part because the bishops’ credibility has been so drastically diminished. We all know why; there’s no need to belabor the sexual-abuse scandal with its record of episcopal obfuscation and self-pity, or before that the damage done by Humanae vitae. Although Dolan acknowledges the disenchantment in the pews, he’s clearly impatient with the subject. Bishops, he tells John L. Allen Jr., have to ‘get over this sense of being gun-shy’ in the wake of all the revelations. Conceding that he and his colleagues must speak with ‘graciousness, and a sense of contrition,’ he adds that ‘we have to mean it.’ But do they really mean it? The impression of many attentive Catholics is that they’d rather pound the crosier on the floor. Dolan himself insists on ‘the uniquely normative value of the magisterium of the bishops,’ as though that ‘value’ remains self-evident.

There are excellent reasons to find the bishops’ recent dudgeon unconvincing. Over the past decade, we’ve witnessed plenty of outrages to human dignity in this country: the official legitimation of torture and assassination; the prosecution of a war condemned by not one but two popes; the growing attacks on governmental support and compassion for the destitute, often under cover of ‘subsidiarity.’ The bishops’ responses to these outrages have been muted at best. Why so little prophetic ardor to battle these iniquities? Why no ‘fortnights for dignity’ to rally the faithful against state-sponsored violence abroad? Or haven’t the bishops noticed that the United States has been at war for the better part of the past twenty years?

McCarraher’s analysis is spot on.  To extend it to the realm of LGBT issues, I would add that if the bishops spoke up more about some of the real world issues concerning LGBT people–bullying, discrimination, violence, alienation from religious institutions–they would be more respected and persuasive.

For example, they have been shamefully silent on the issue of the anti-homosexual bill which has been discussed in Uganda’s parliament for several years now, and which could be passed into law as early as next week.  This bill would impose the death penalty for certain lesbian and gay people, and harsh penalties for even the slightest acknowledgement of one’s homosexuality.  Why don’t the bishops see this as a pro-life issue and speak as forcefully against this bill as they do about abortion?

Cardinal Dolan’s advice to bishops to just entrench themselves more firmly in bunkers of isolation from the real world is a dead end.

The bishops’ insistence on such a narrow agenda of items and their unwillingness to speak out when LGBT human rights are trampled upon will continue to make them non-credible authorities long after the sex abuse crisis is a dim memory.