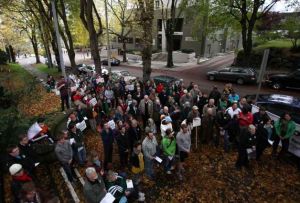 In Washington State, Catholics who support marriage equality have marked the final push towards their Election Day referendum with prayerful vigils and spirited reflections.

120 Catholics gathered outside Seattle’s St. James Cathedral last Sunday to pray, sing, and reflect on their commitment to supporting marriage equality.  Organized by Catholics for Marriage Equality Washington, the vigilers prayed for the passage of their state’s referendum which would legalize marriage equality there.

In a Seattle Post-Intelligencer article, two of the participants offered their reflections:

Robert Gavino, 19, a Seattle University student: “I would just say the God I have come to know is not one to tell people they are not equal.”

State Sen. Ed Murray, D-Seattle, a Catholic, gay lawmaker who was chief sponsor of marriage equality in the legislature: “I think any time we show solidarity with those on the margins of our society, it is an expression of our faith,” said Murray.  “We (gays) are certainly on the margins . . . at least in the hierarchy’s structure.”

Chad Griffin, president of the Human Rights Campaign, and an alumnus of Georgetown University, spoke of his Catholic education:  “Nowhere, ever, did it tell me to oppose a right that I might have.  Or to support discrimination against my brothers and sisters.”

On the same day, in Yakima, Washington, the central part of the state,  Catholics  for Marriage Equality Washington also gathered Catholicsfor a candlelight vigil to “to express disagreement with the role the Catholic Diocese of Yakima has taken in opposing Referendum 74 affirming same-sex marriage, ” according to a news story in the Yakima Herald-Republic.

One of the organizers of the event explained its origin:

“Leo Kucek, who attends Sacred Heart Parish in Prosser, is one of the organizers of the candlelight vigil. He said many Catholics were upset last month when Bishop Joseph Tyson requested that all 41 parishes in the Yakima Diocese conduct a special financial appeal during Mass. Money collected went to Preserve Marriage Washington, a statewide group seeking to defeat Referendum 74. . .

“Kucek said, ‘When a church starts acting as an arm of a political campaign, collecting money during a sacred Mass, that’s a slippery slope.’ “

In addition to these two events, two opinion pieces have recently been published by Catholics working for marriage equality in that state.

In the first piece, which appeared in The Seattle Lesbian, John Moreland,  a lifelong Catholic, married 46 years with four children and three grandchildren, refutes the notion that same-sex marriage will be promoted in schools:

“Through the Washington State Catholic Conference, the bishops argue that all schools will have to promote same-sex marriage as equal to heterosexual marriage.   This is false.   The bishops apparently are following the kind of memos put out by national right-wing extremist groups whose research shows that their strongest campaign weapon is fear.  These groups target mothers of school-age children, whose legitimate concern is for their kids. They try to manipulate them by claiming that their children will be exposed to some kind of unhealthy sexual curriculum if marriage equality passes.

“Private schools, including Catholic schools, can teach whatever they want about marriage and families.  With the passage of Referendum 74, nothing will change. The bishops will continue to allow and encourage Catholic schools to teach Church doctrine about families and marriage. I believe that treating and loving our neighbor as ourselves is a good place to start.”

The second essay was penned by Chase Nordengren, a graduate student at the University of Washington in Seattle who has been working on the referendum campaign.  His essay, which appeared in the National Catholic Reporter, is a philosophical/theological reflection on courage vs. fear:

“Central to the life of Christians, writes Paul Tillich, is ‘the courage to be,’ one’s willingness to affirm one’s essential nature regardless of, at times despite, social forces that reject that nature. The radical idea of faith, Tillich argues, rests in the practice of this essential skill, the skill to affirm all the parts of our identities God brought into being.

“Much of Tillich’s work centers on courage’s opposite — anxiety. Anxiety has no object, no focus: “therefore participation, struggle and love with respect to it are impossible.” Anxiety is that which cripples our action.

“Fortunately, Tillich writes, anxiety aspires to a different emotion: fear. Fear seems debilitating but, paradoxically, it exists only in a place where one is self-affirming, when one has something to lose and something to be afraid of. “The self is self only because it has a world, a structured universe, to which it belongs and from which it is separated at the same time.” Courage is acting with knowledge of fear, overcoming fear.

“Veterans of the gay rights movement that I have met have much to be fearful of: hateful speech, violence and denial of some of the qualities of a decent and free life. Their perseverance is a sign, to me at least, that fear has led to courage. The desire to affirm who one is, to be proud, to truly enter into community with an open heart pushes them onward.”

Nordengren then applies the concept of courage to the situation of marriage, particularly same-sex marriage:

Marriage, too, is an act of courage, the faith in something that transcends ordinary experience. Growing in faith, growing in the courage to be, requires being part of a structured universe. It requires a world in which one is both part — as in, part of the community of the committed — and not a part — as in, committed to someone else on a level all that much deeper. Making that courageous choice requires, demands our respect. It also demands our recognition.

“Same-sex marriage is, and will continue to be, an issue that deeply divides the Christian community. I pray earnestly for the days when that divide closes. In the interim, however, the God of our faith asks us to stand with our brothers and sisters as they make the big leaps in their lives or, at the very least, step aside. As our gay and lesbian brothers and sisters continue on the journey of their lives, removing the legal barriers to their next step is not only an act of love, but also an act of affirming faith.”

Along with Nordengren, Moreland, and all of Washington’s Catholics for Marriage Equality, we at New Ways Ministry, also pray for this same kind of courage for ourselves and all Catholics.