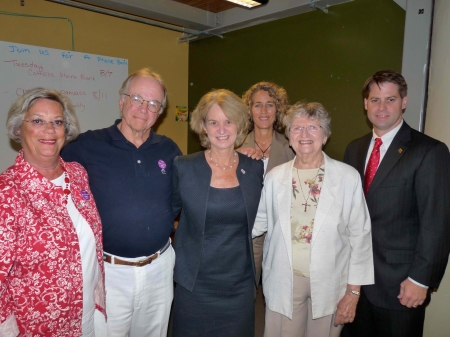 Catholics took center stage in the debate on marriage equality in Maryland yesterday.   Kathleen Kennedy Townsend, the state’s former lieutenant governor and the eldest child of the late Senator Robert F. Kennedy, was the featured speaker at a press conference on Catholic support for marriage equality.  The event was sponsored by Marylanders for Marriage Equality, a coalition working to insure that the state’s marriage equality law, passed and signed in the spring, will be approved by voters in a referendum this November.

“All people, gay or straight, should have the opportunity to marry the person they love and raise the family that they want to raise.”

“I cannot understand how my gay son getting married to the person that he loves can do harm to anyone else’s marriage.”

Durkin’s open letter to the Maryland Catholic bishops was featured in a Bondings 2.0 blog post in December 2011.

” ‘He brought with him the understanding that the church can’t tell you what to do, but the values of the Catholic church, the values of love and faith, can influence what you do,’ she said.

“Also, she referenced an article about apartheid that her father wrote after returning from a trip to South Africa. Entitled ‘Suppose god is black,’ the 1966 piece made a case against that country’s segregated political system.

Townsend was a featured speaker at New Ways Ministry’s Seventh National Symposium in March of this year, where she first publicly declared her support for marriage equality.  She eventually turned her Symposium talk into an article about   marriage equality as a civil rights issue, which appeared in The Atlantic.

“Durkin, 83, a self-described ‘cradle Catholic,’ said she was there to urge her fellow Catholics to vote their conscience and support same-sex marriage.

” ‘To vote to uphold the civil marriage law, for all loving, committed gay and lesbian couples, we should be acknowledging in everyone, including my gay son, the inherent dignity and fairness due them as human beings,’ Dirkin said.

“She said the church, her long service in ministering to the home-bound and as a scripture study leader taught her the importance of the ‘golden rule,’ which should be applied to same-sex marriage.

” ‘What we’re debating here in Maryland is whether gay couples can go to the court house and get a marriage license. What churches decide to do, which marriages they decide to solemnize or not is up to them, and that’s the way it should be,’ Dirkin said. ‘I can guarantee you my late husband and I would not want anyone telling us we could not marry. It’s the golden rule again coming up, we should treat other people the way we wish to be treated.’ “ 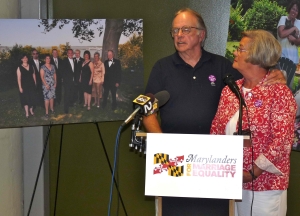 At the press conference: Pat and Jenny Nugent

“Jenny Nugent said she and her husband had never paid much attention to gay or lesbian people before she started to take care of them as a nurse. She then saw gay people who had no support and had been ostracized by their families. She said seeing that had reinforced something she knew as a mother—that every child is special and deserves to live a full life, including marriage.

” ‘I never want our son or any of our children to be alone in sickness or in health. I want each of them to have the security and joy of a family that they create, and for that family to have the legal protections that come with civil marriage,’ Jenny Nugent said. ‘That’s why, for myself as a Catholic, I’m going to vote my heart and my conscience and support marriage equality.’ “

In June, Bondings 2.0 reported on the efforts of Catholics for Marriage Equality Maryland to organize Catholics in the state to support same-gender marriage in the upcoming referendum.  We will continue to bring you news on Catholic programs and projects in Maryland, and in other states (Maine, Minnesota, Washington State) where the issue will be on the November ballot.

Bishop Cupich's Message of Compassion Should Become a Message of Justi...Drag Queens Prohibited at Most Holy Redeemer Parish
Scroll to top
Loading Comments...
%d bloggers like this: