I am just returned from England, where I participated in several World Pride events.  It’s somewhat amazing that on my last day there, news about a lesbian couple from Nebraska is making headlines.  The Daily Mail newspaper reports: 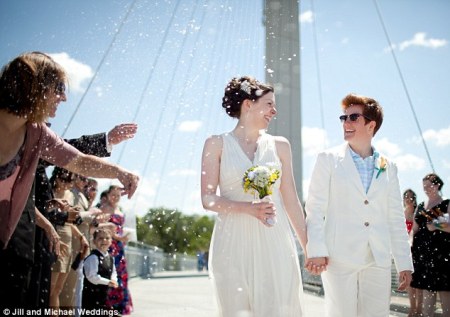 “A newlywed Nebraska couple is outraged after the Omaha Archdiocese pulled their wedding announcement from their high school’s newsletter.

“Lizz Dyer and Katie Brown were thrilled when someone from Marian High School offered to publish news of their wedding in the Catholic school’s quarterly publication, but the Archdiocese nixed their announcement before it ever went to print.

“A school official tipped off the religious headquarters who opted to censor the high school sweethearts’ ceremony, saying the would not support the celebration of a wedding not upheld by the Catholic Church.”

While the archdiocese sees this as a matter of principle, the couple see it as a factual statement:

” ‘We’re just asking that they share with our classmates and friends that we got married, which we did,’ Mrs Dyer said.

“The pair had met at the school and remain close with their classmates, many of whom attended the ceremony. The photographs of the brides kissing, holding hands and exchanging vows never made it to the newsletter.”

Friends of the couple have started a petition to have the school print the announcement and have collected 700 signatures, though the archdiocese says it will not bend on its decision.

Situations like this are troublesome and frustrating, no doubt.  As more and more lesbian and gay graduates of Catholic high schools and colleges decide to take advantage of new marriage equality laws, situations like this one are bound to multiply.  Church officials need to devise a better pastoral response than simply, “No.”  They can start by eliminating their prejudice that lesbian and gay marriage is the worst of all things that can happen, and start talking with lesbian and gay couples to find out more about their lives and relationship.  The pastoral challenge that this situation presented could have been an opportunity for growth, not a publicity nightmare that is spanning the Atlantic Ocean.

Priest Who Denied a Lesbian Communion Is No Longer Welcome in ArchdioceseAustralian Catholic Priest Re-Launches Campaign to End 'Gay Panic'...
Scroll to top
Loading Comments...
%d bloggers like this: