The priest who denied communion to a Catholic lesbian woman at her mother’s funeral Mass is no longer in active ministry in the Archdiocese of Washington, DC, where the incident occurred.

Father Marcel Guarnizo refused to offer a host to Barbara Johnson at St. John Neumann parish, Gaithersburg, Maryland, back in February.  The incident made international headlines.  Shortly afterwards, Guarnizo was placed on leave from ministry for unspecified “intimidating behavior,” and now the Archdiocese of Washington has revealed that he will no longer be ministering within its borders.

MSNBC. com reports that Chieko Noguchi Scheve, director of media and public relations for the Archdiocese of Washington, announced on July 10th: 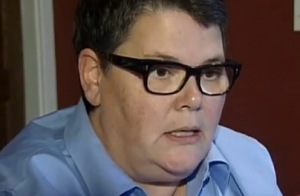 The website also reports on Ms. Johnson’s response to this announcement:

“She told msnbc.com on Monday that she was relieved by the archdiocese’s move, although she thought it might have more to do with the alleged ‘intimidating’ behavior than how she was treated at her mother’s funeral.

“ ‘It gives me great comfort to see that the Archdiocese of Washington acted swiftly initially not only to point out that his behavior was wrong and not in accordance with their policy but then to suspend him. And this final message from them says to me that, unfortunately, this was not a person that was meant to be in the ministry in this region,’ she said. ‘Knowing that he will not be able to visit such pain on another family in the Washington archdiocese gives me and my family a lot of comfort.’

“One positive aspect of what happened to her was that ‘it showed the very human face of the issue regarding the church and the church’s teachings, and behavior towards the LGBT community within the church,’ she said. ‘I just wish that there was a more global and more positive church response to the LGBT community’ on issues such as marriage equality and communion.”

In interviews during this incident, Ms. Johnson spoke eloquently on the need for better understanding between the institutional church and its LGBT members.  In March, shortly after the funeral incident,  she addressed New Ways Ministry’s Seventh National Symposium in Baltimore, Maryland,  and thanked Catholics for the amazing outpouring of love she received and about how the church needs to focus on its mission of love:

“What matters…and all that matters…is love. The love that you, and so many others have shown me during my darkest hours, has been uplifting and healing. . . .”

Berlin Cardinal Re-Affirms His Support for Lesbian and Gay Relationships Nebraska Lesbian Couple's Wedding Announcement Is Nixed by Archdiocese
%d bloggers like this:
Scroll to top