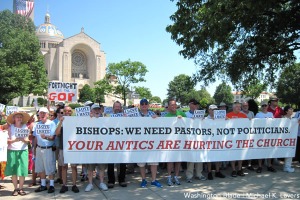 LGBT Catholics and supporters outside the Basilica of the National Shrine of the Immaculate Conception, Washington, DC.

The U.S. bishops’ “Fortnight for Freedom” campaign, designed to try to convince people that religious freedom is under attack in our nation, ended on July 4th.   LGBT Catholics and supporters gathered on that day at the Basilica of the National Shrine of the Immaculate Conception, Washington, DC, to protest the campaign.  The Washington Blade reports:

“ ‘We’re here as a non-partisan group of Catholics to say we don’t want our church involved in these kind of politics,’ Joseph Palacios, director of the Catholics for Equality Foundation, told the Blade as he and other protesters stood in front of the basilica on Michigan Avenue, N.E. ‘We want our church leaders to be pastoral leaders particularly concerned with the poor and the vulnerable, the gay and lesbian community, women and the equal rights of all people rather than the partisan politics they seem to be playing.’ ”

“Members of Catholics United, Dignity USA, Nuns on the Bus, the Gay and Lesbian Activists Alliance and other organizations took part in the protest that coincided with a Mass that marked the end of the “Fortnight for Freedom” campaign that the U.S. Conference of Catholic Bishops launched last month in Baltimore. Protesters sang hymns and held a banner that read ‘Bishops: We need pastors, not politicians. Your antics are hurting the church’ on the sidewalk in front of the basilica as the faithful arrived. . . .

” ‘I’m here today because I think our bishops are on the wrong track,’ said Sister Jeannine Gramick of New Ways Ministry and the National Coalition of American Nuns.  ‘They’re using religious liberty as a political tool to be against the president, when in reality the people whose religious liberty is being denied are the people who work at church-related institutions. Freedom of conscience is for the individual.’ . . .

” ‘They [the bishops] want equality only for heterosexual people and so they’re using the argument of religious freedom,’ stressed Gramick. ‘It’s the freedom of the individual that’s being denied. No church or religious institution is going to be forced to perform gay weddings and this is what our bishops are leading Catholics to believe, which is false.’ ”

“The Catholic hierarchy is trying to fundamentally change the legal understanding of individual liberties, weighting the supposed rights of religious institutions more heavily than individual rights. At New Ways Ministry, we think there are good secular and religious arguments for not twisting the law into a tool for discrimination. Last fall, the Catholic bishops created the Ad Hoc Committee for Religious Liberty to protect against a host of alleged threats, with five of the six predictably having to do with sexuality. The committee opposes same-sex marriage and endorses ‘ministerial privilege,’ which sets different employment standards for religious groups, allowing discrimination that is illegal for other employers. In addition, religious institutions should not have to cover contraception in employee health plans; Catholic charities should continue to be awarded federal funds to serve victims of human trafficking while refusing to provide a full range of reproductive services; and international HIV prevention programs should not require condom distribution. . . .

“The LGBT community has suffered under the law, both by discriminatory statutes and from a lack of recognition for dimensions of our lives that don’t fit within existing legal norms. But our faith in the law and our respect for religious differences are what have many of us invested in the painstaking process of nurturing good, rights-affirming policies while uprooting injustice. Our fundamental objection to the bishops’ religious freedom campaign is that it’s a misuse of the law — an attempt to create new rights for religious institutions while trampling on the rights long-guaranteed to all individuals.”