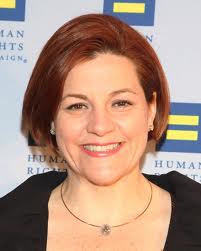 Christine Quinn, New York City’s Speaker of the City Council is a Catholic lesbian woman.  Her name is often discussed as a potential candidate for mayor of the Big Apple.

In a recent interview with National Public Radio with David Greene, Quinn discussed some topics concerning her faith, family, and Catholic identity. The following are some excerpts:

GREENE: Your Catholic faith and your family, I wonder on a personal level how you sort of deal with that in your life and also, you know, deal with being gay – not only gay, but one of the most powerful gay women in politics in this country.

GREENE: But your church, obviously, doesn’t, you know, officially accept that.

QUINN: Right. That’s kind of their problem, not mine. I mean, I just don’t dwell on it. I’m not really sure what the upside of me dwelling on it would be. I mean, I was raised Catholic, I take a lot of comfort and inspiration and motivation and support from my faith. I get what they kind of see in some political issues. They get that we’re not in agreement on that. But that doesn’t make me not who I am. It’s still who I am.

QUINN: No. Well, how can you leave a faith? A faith is who you are. It’s what’s inside of you. It’s how you see the world. It’s what inspires you. It’s what comforts you. It’s what uplifts you in the dark days. You can’t leave a faith. The faith is who you are. It’s what you have. Why should I leave the church? It’s my church. They’re the ones who have the wrong perspective. I’m not going to leave. If I leave, it’s as if they won. I’m going to go into any church any time I want to, whenever I want to. It’s my church. And no one’s ever asked me to and no one ever will.

Quinn also discussed her relationship with her father and how that has developed:

GREENE: What was it like coming out to your father, to your family? And are those memories still there with you?

QUINN: You know, when I told my father, it wasn’t perfect. He said never say that again. I said, you know, that’s – I said I’ve told you. That’s my job. That’s my responsibility here. What you do with the information is up to you. And there were some rocky months. But he got through it, is over it. He comes to City Hall every day and volunteers. And he’ll march in the Pride Parade with me. And he stuffs envelopes and delivers things and has been part of every political campaign and every effort I’ve ever had. Just like he was at every science fair and every softball game and every soccer game.

GREENE: I want to hear a bit about your family. Your grandmother somehow survived the Titanic. And can you…

GREENE: Can you give me the short version of…

GREENE: …of that extraordinary…

QUINN: Sure. Her name then was Nelly Shine. She was a teenage girl. It’s not 100 percent clear ’cause she lied about her age most of her life. But let’s say she was 18, but we don’t really know. And she came from a big family in Cork, Ireland. And her parents were dead and her sister had too many people to take care of and not enough money, and said that – said basically, Nelly, you have to go to America to be with your brother and cousin. So, my grandmother very quickly got a ticket in steerage, third-class, on the Titanic. Story goes she was the last one to get on the last lifeboat and made it off alive. She was quoted as having said when the other girls dropped to their knees to pray, I made a run for it.

GREENE: And you told a priest about that at some point.