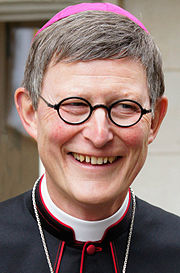 A different translation of Cardinal Rainer Maria Woelki’s comments about the equality of homosexual and heterosexual relationships offers a slight shift in the understanding of the Berlin archbishop’s message reported here on May 20th, though, as far as I can understand, it is still a very hopeful message.  First, I’ll explain the translation issue and then explain why I think it is still hopeful.

Terence Weldon, who blogs at QueeringTheChurch.com, alerted me to a blog by Daniel Silliman, who posted a variation on the translation of Woelki’s comments.  Silliman’s post translates Woelki’s remarks, reported in The Deutche Presse-Agentur, the largest news organization in Germany, in this way:

“The Berlin Archbishop Rainer Maria Woelki considers it possible that the Catholic Church will soften its strict position against gays and lesbians in the long term …. It is conceivable that the criteria will be refined. He considers it is imaginable that, ‘where people take responsibility for each other, where they live and practice a longterm/permanent  homosexual relationship, that that is to be regarded in a similar way [emphasis mine] as a heterosexual relationship,’ Woelki said on Thursday at the Catholic Congress in Mannheim.

“However, no one can expect a quick change of heart from the Church on this question. There will be no quick fixes, such a process could take a long time. Above all, this would not change it, that the marriage between man and woman for the Catholic church has a special rank, emphasized Woelki. . . .
“The Magisterium of the Catholic Church must deal with such developments. Unfortunately, this often takes a long time, and would not help people living today, said Woelki.”

The biggest difference here is whether Woelki’s comparison phrase is translated “in a similar way” or “in the same way.”  While there is certainly a difference between these translations, I still believe that even if the weaker one is more correct, it is still a giant step forward from the usual absolutist approach most church leaders take that no change can ever possibly take place in the area of homosexual relationships.
What’s more important, as I pointed out the other day, is that Woelki’s acknowledgement of the possibility of change is part of a trend I’ve noticed in the last six months where prelates are finding ways to make concessions about civilly legal ways to recognize committed same-gender relationships.   These concessions are in direct contradiction to the Vatican’s 2003 document “Considerations Regarding Proposals to Give Legal Recognition to Unions Between Homosexual Persons”  which stated:

“Where the government’s policy is de facto tolerance and there is no explicit legal recognition of homosexual unions, it is necessary to distinguish carefully the various aspects of the problem. Moral conscience requires that, in every occasion, Christians give witness to the whole moral truth, which is contradicted both by approval of homosexual acts and unjust discrimination against homosexual persons. Therefore, discreet and prudent actions can be effective; these might involve: unmasking the way in which such tolerance might be exploited or used in the service of ideology; stating clearly the immoral nature of these unions; reminding the government of the need to contain the phenomenon within certain limits so as to safeguard public morality and, above all, to avoid exposing young people to erroneous ideas about sexuality and marriage that would deprive them of their necessary defences and contribute to the spread of the phenomenon. Those who would move from tolerance to the legitimization of specific rights for cohabiting homosexual persons need to be reminded that the approval or legalization of evil is something far different from the toleration of evil.”

Cardinal Woelki’s comments (even in the translation which weakens the comparison to heterosexual unions)  and the comments of the other bishops cited in my previous post ignore this document’s injunction not to approve of homosexual acts and they certainly do not state clearly “the immoral nature of these unions,” but instead do quite the opposite.
I hope that my post on May 20th did not give the impression that I believed that equality for heterosexual and homosexual relationships in the Catholic Church was just around the corner.   That was not my intention.  Even without knowing of Woelki’s comments that such a change might take a long time, I was still under the impression that such would be the case.  For example, while I rejoice that Bishop Geoffrey Robinson of Australia has called for a re-thinking of the church’s approach to sexual ethics,  I am not going to hold my breath until that happens.  Yet, it is still a giant step in the rigtht direction that a bishop has issued such a call.
The cause for rejoicing in Woelki’s statement is that a Cardinal of the Church has acknowledged goodness in same-gender relationships and has compared them to marriage–unlike comparing them to addiction, bestiality, and other human frailties or perversions, as some of his brother bishops have been known to do.  Knowing that one Cardinal–especially one who may not see full equality between heterosexual and homosexual relationships as ideal–can make such a positive comparison indicates that the hierarchy of the church can indeed work for change in this area of doctrine.
I thank Terence Weldon and Daniel Silliman for their clarifications.  I invite readers to offer their thoughts on the Cardinal’s statement, and whether or not this news is seen as a sign of hope.
–Francis DeBernardo, New Ways Ministry