A gay Catholic alumnus of  a Catholic high school in Mount Pleasant, Michigan, has  been disinvited as commencement speaker after it was learned that as an openly gay man, he is engaged to be married to another man in New York.  The origin of the disinvitation, however, remains a bit of a “whodunit” mystery.

Sacred Heart Academy had originally invited Dominic Sheahan-Stahl to speak at the graduation ceremony where his youngest brother will be one of the seniors leaving the school, and where three generations of their family had been educated. Sheahan-Stahl recounts his side of the story in a YouTube video entitled “Live through Love. Stop discrimination”:

The other side of the story is a bit murkier. The Detroit News reports that

“. . . officials with the Catholic Diocese of Saginaw withdrew the invitation when they learned he is gay.”

The same report also states, however, that it was

“[Sacred Heart Academy Principal Denny]Starnes and some on the schools’ staff [who] learned Sheahan-Stahl was gay after seeing engagement photos on Facebook.” 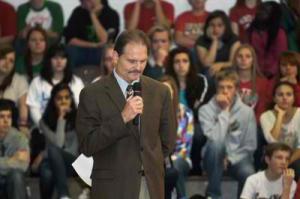 An MLive.com account intimates that the diocese was the origin of the disinvitation, noting that the school principal, Denny Starnes, announced at an assembly for students and parents that he supports Sheahan-Stahl:

“In front of the Sacred Heart students, staff, parents and various media, Starnes gave an impassioned speech about what the school has been through this week. He spoke haltingly and deliberately, giving support
to Sheahan-Stahl, the senior class at Sacred Heart and the Catholic Church.

“After hearing the students and praying, Starnes said he believes Sheahan-Stahl is the perfect commencement speaker.

” ‘How can I not support this young man to come and speak to this class?’ he said before the school.

“Starnes said he respects the Saginaw Diocese and their decision. As a neighbor to the Sheahan-Stahl family, he said, he knows them well and remembers Dominic as a boy.

” ‘This is my community, of course I’m going to feel different here than someone making decisions in another county,’ Starnes told the student body. ‘The church is not sharing my position on this issue.’ “

Sheahan-Stahl participated in the assembly with Starnes via Skype.

A statement from the Diocese of Saginaw explains they had no role in the decisions, yet does not mention if Sheahan-Stahl should be allowed to speak at the ceremony, and implies that he should not:

“The events that have unfolded regarding the graduation address at Sacred Heart Academy Catholic school in Mt. Pleasant are unfortunate. The decisions to invite, and to rescind an invitation to a graduate who was to deliver the commencement address, were done independently of and without any discussion with the Office of Catholic Schools or the Office of the Bishop for the Diocese of Saginaw.

“The Most Rev. Joseph R. Cistone, Bishop of Saginaw, learned about the events Thursday, only after the situation was reported by local news outlets. Further, neither the bishop nor the diocese were informed of, or invited to participate in, a news conference that was held at the school today.

“‘I am distressed by the way in which Sacred Heart Academy school leadership has handled this situation, and have expressed this to the school’s pastor,’ Bishop Cistone said. ‘It has hurt an individual, a family, a graduating class and an entire school and faith community.’

“‘The Catholic Church is very clear in her teaching, that men and women who have homosexual tendencies must be treated with respect, compassion and sensitivity. Every sign of unjust discrimination in their regard should be avoided.”‘ The bishop added, ‘The Catholic faith teaches that individuals with homosexual tendencies, as well as unmarried heterosexuals, are called to lead a celibate lifestyle.’

Students and others have been overwhelmingly in support of Sheahan-Stahl as speaker.  They have started a Facebook page, “Let Dominic Speak,” which as of this writing has 5,107 “Likes.”  A Change.org petition entitled “Sacred Heart Academy, Mt Pleasant MI: STOP endorsing homophobia”  already has 5, 368 signatures.

Sheahan-Stahl will deliver a speech after the graduation ceremony at Warriner Hall on the campus of Central Michigan University.

Regardless of how the decision was made, it is a shameful one that continues to send a message that is contradictory to the Catholic spirit of inclusion and non-discrimination for LGBT people.  The fact that Sheahan-Stahl will still be able to speak shows that the Spirit will not allow such discrimination to squelch the message of inclusion: I believe that God will find a way to have words of inclusion and equality spoken, even if church officials will not cooperate with such a plan for justice.  At the very least, church officials will have to see that Catholics who support equality are not going to just “roll over and die” when adversity strikes; they will find a creative (if not ideal) alternative to let their message be heard.  The sign of the Spirit working in this situation, for me, is that people are finding the wisdom and courage to respond to the unjust decision of disinvitation, and not just giving up or giving in. They are modeling the work of an inclusive church, in the face of church leaders trying to act otherwise. Perhaps it will be a lesson for whatever Catholic officials made the disinvitation decision that Catholics will not be stopped in their quest for equality and justice for LGBT people.