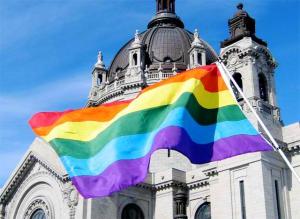 Catholics are playing a major role in the marriage equality debate in Minnesota, where this November, voters in the state will go to the polls to vote on proposed constitutional amendment to ban marriage between people of the same gender.  Bondings 2.0 has reported several times on the issue, particularly the good work that the group Catholics for Marriage Equality–Minnesota has been doing.  (Links to previous posts can be found under the heading “Minnesota” in “Categories” listing in the right-hand column of this blog . →)

MinnPost.com recently featured the role that Catholics are playing in the debate in an article entitled “Conflicted Catholics: Consciences wrestle with church actions on marriage amendment.”    The personal stories explain not only the division that the proposed amendment is causing among Catholics, but the faith journeys that many individuals and faith communities are experiencing  by becoming involved with the campaign to promote equal marriage rights for all.

The article profiles Lisa Vanderlinden, the mother of a gay son, whose family moved to a parish which has a public outreach to LGBT people.  Their former parish, she explains, has become heavily involved in work to support the ban on marriage equality:

“In keeping with orders from Archbishop John Nienstedt, a prayer is now said during Sunday services affirming marriage as the union of one man and one woman. A committee has been formed to work in favor of a proposed amendment to the Minnesota Constitution banning same-sex marriage that will appear on the November ballot.

“And a percentage of every dollar parishioners give goes to the archdiocese, which recently donated $650,000 to the group pushing for the ballot initiative.”

But Vanderlinden and her family have taken a different Catholic approach:

“ ‘The Catholic hierarchy would like the public to believe that it is the only voice of the people,’ she said. ‘Since Vatican II that’s not true. Our teaching says we must speak our conscience even when it conflicts with church authorities. . . .’

Laura Kuntz, another Twin Cities Catholic, found that the archdiocese’s increasing political involvement to defeat marriage equality was having a detrimental effect on her identification with the Church.  And then, she got involved with Catholics for Marriage Equality–Minnesota:

“A year and a half ago when Nienstedt circulated a DVD calling for a same-sex marriage ban, Kuntz and her husband stopped giving to their church, because it was obligated to tithe 8 percent to 10 percent of their donation to the archdiocese.

“At some point after she shared her feelings with a few fellow parishioners, she got a call from someone she describes only as a diocesan employee, who told her about a group called Catholics for Marriage Equality. Throughout Lent, the group held vigils outside the chancery in St. Paul. For Kuntz, participating brought comfort.”

Some Catholic individuals and parishes are protesting by not reciting the prayer against marriage equality that the archdiocese has instructed communities to use at Masses:

One of the authors of the blog The Progressive Catholic Voice, Paula Ruddy is unconvinced the prayer is being said in very many parishes. “I don’t know anyone whose parish is pushing this,” she said. It doesn’t matter whether the priest agrees with it or not, the issue is introducing a potentially divisive element to a worship service.

“One of my friends said their deacon was asked to give it as part of the homily,” she said. “He said, ‘It’s not that I am opposed to it, but I don’t want to do something so controversial.’ ”

Her fellow blogger Mary Beckfeld has friends in four western suburban parishes who say the prayer is not being said there, either. A friend of hers was asked to read it on Good Friday and refused. Her pastor’s response: “Do what your conscience tells you.”

Ron Joki, a gay man who converted to Catholicism, speaks of the role that conscience plays in his decision to remain part of the church and to be involved in the struggle to secure marriage equality rights:

“Joki sees no contradiction between his sexual orientation and his faith. ‘There are many ancient rules in the Bible that no longer serve us, that were cultural,’ he said. ‘We are not breaking the important rule, which we interpret as the basic rule of loving God and loving our neighbors.’ ”

“He’s comfortable with the approach some liberal parishes are taking of engaging in discussions about the church’s support for the amendment, but making sure multiple viewpoints are represented. ‘God speaks to us in our conscience,’ Joki explained. ‘We need to be respectful of all sides.”

Joki sees the work of the Spirit in the differing voices present in the church on this issue:

“ ‘The spirit works in many levels, not only at the top of the hierarchy but at every level,’ Joki said. ‘Many of the people the church now recognizes as saints, as heroes of the church, were originally people who were renounced and condemned.

“ ‘Sometimes, the opinions that are the last to change are at the top.’ ”

What are some of the lessons I’ve learned from the experience of these Minnesota Catholics?

2.  Seek out a supportive community.

3.  Work together with others to enact justice.

4.  Respect all, even those who disagree with you.

5.  Change comes from the bottom and rises to the top.

6.  The church doesn’t always immediately recognize its saints who are working for justice.