The initial news cycle centered on the Vatican’s attempted suppression of the Leadership Conference of Women Religious (LCWR), the leading organization of U.S. nuns, seems to be dying down.  However, make no mistake: the story is not over! The most important piece of it is yet to come:  How will the nuns respond to the Vatican’s Congregation for the Doctrine of the Faith (CDF) decision to place an archbishop in charge of their conference, in effect, displacing the women’s leadership of themselves?

At New Ways Ministry, which has had its own encounters with the CDF, it is clear that the recent statement from this hierarchical office is designed to silence dissent by instilling fear, not only from the LCWR, but from other sectors of the church, too.  The Vatican no longer has a Grand Inquisitor to physically torture or jail people it calls “dissenters,” so the only tool left to silence them is fear.

We have seen this time and again at New Ways Ministry.  Whenever the Vatican makes a strong statement against LGBT people, one of the most widespread reactions and responses from church people is to be afraid.  Yes, there are many who express anger and outrage, but many, many more respond quietly by silencing themselves, afraid that if they speak out that they, too, will experience the wrath of Church authorities. 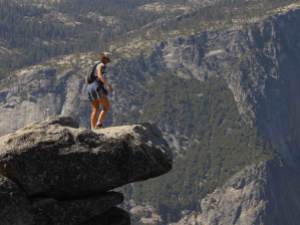 Fear, however, is not the full story.  I believe that though church authorities might be instilling fear through their actions, there is another reality present in these situations.  I believe that when fear is present,  God is calling us to courage.  Though it may seem that the LCWR has few options at this juncture (see the posting about canon law guiding this case), they do, in fact, have the option to respond courageously, relying on God’s power instead of the power of human beings–themselves or their oppressors.

When the CDF tried to suppress Sister Jeannine Gramick, New Ways Ministry’s co-founder, by telling her that she could not do pastoral work with lesbian/gay people and that she could not speak about the Vatican’s investigation of her ministry, she responded with a simple statement filled with eloquent courage, “I choose not to participate in my own oppression.”

Those who see the injustice of the CDF’s attempt to suppress LCWR need to respond with similar courage.  Now is not the time to be afraid, worried, or despairing.  We must rely on our God who promised to be with us and guide us in our times of need.  The only thing we can ever change is ourselves and our responses, not other people or situations.  We have the choice at this juncture to respond with courage.

The LCWR leadership has announced that they will be consulting their members, the heads of women’s religious communities around the country, as to how to respond to the CDF announcement.   One thing that ordinary Catholics  can do is to exercise a ministry of en-courage-ment by writing to the leaders of nuns’ communities that we know and love, and letting them know that they have the support of Catholics in their time of need.   We need to let our Sisters know that they are not alone, and that the Catholic people stand courageously in solidarity with them.  If we want LCWR to respond with courage to this situation, we must en-courage the Sisters that we know and love.

(If you do not know the names and addresses of the leaders of the community of nuns who have ministered to you, ask a local nun for their contact information or call/email New Ways Ministry, and we will help you get that information.  New Ways Ministry phone: 301-277-5674; email: info@NewWaysMinistry.org .)

You don’t have to write a long letter.   Just let the Sisters know that you are praying for them, that you are grateful for their ministry, that you want them to continue to be prophetic, and that you will support them.

In doing so, you will be spreading one of Jesus’ most consistent Gospel messages:  “Be not afraid.”

Previous Bondings 2.0 posts on the CDF-LCWR story (with some of the links each post contains):