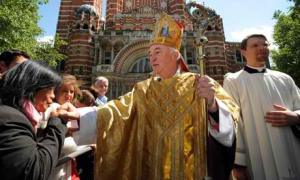 Archbishop Vincent Nichols, the leader of the Catholic church in England and Wales, has made the news once again for offering a more moderate position on marriage rights for lesbian and gay couples, and issues related to the topic, than some of his more conservative religious colleagues.

Last week, in response to a speech at the Vatican by England’s Lady Warsi, a Conservative Party member in the British cabinet, in which she decried persecution of Christians by “militant secularism,” Nichols commented to The Guardian newspaper:

“”I personally don’t feel in the least bit persecuted. I don’t think Christians should use that word.”

These comments were made in the wake of a petition circulating the internet by Lord Carey, the former Anglican Archbishop of Canterbury, which denounces marriage for lesbians and gays.  The Guardian article notes that

“Catholics will be encouraged to sign the petition against gay marriage as individuals, but the church as a whole will not be part of Carey’s campaign. . .”

“Archbishop Vincent Nichols has once again demonstrated sanity and moderation on the place of the Catholic Church in modern society. While there are many loud, outraged voices raised in complaint in the US and in the UK over alleged assaults on religious freedom and of perceived persecution of Christians, Nichols has correctly pointed out that what is happening is not the “persecution” of Christians, but an attempt to separate the legal and cultural life of the country from its Christian roots. He is saying in other words, that what is happening is a removal from the Church of its previously privileged position. This may be deplorable, unfortunate, or welcome – but does not amount to persecution, any more than the removal of apartheid in South Africa represented the persecution of Whites.”

The Guardian report notes a shift in favor of LGBT rights among English Catholics:

“The emergence of the Catholic church into the mainstream of national life has been accompanied by a change in character: the old working class Irish-based Catholicism has almost vanished, to be replaced by a much less traditional English middle class which largely rejects the Church’s teachings on birth control and homosexuality, while still treasuring it for its spiritual value.”

The hierarchy, led by Nichols, is also taking a more moderate approach to civil unions legislation than their counterparts in Scotland:

“The reasoned tone [of Nichols] seems a deliberate attempt to take the high ground in the national debate. The statements of the English Catholic bishops in favour of civil partnership (as an alternative to gay marriage) contrasts very noticeably with the grumbling anathemata issuing from the Scottish and Irish churches on the subject.”

A Tablet article highlights the different approach taken by the Scottish the the English/Welsh hierarchies on the issue of civil unions.  Back in December 2011, Bondings 2.0 reported on Nichols’ support and reasoning for civil unions.  You can access those two posts by clicking here and here.

While certainly not a progressive on these marriage issues, Nichols represents a moderating voice in the Church which at least holds open the possibility of discussion on these matters.  The Guardian notes that his perspective on issues of homosexuality are far more pastoral than many other prominent church leaders:

“When asked how to interpret the notorious Vatican description of homosexuality as ‘a tendency towards an objective moral evil’, Nichols gave me a carefully prepared talk on the roots of Catholic philosophy. ‘This is a philosophical construct,’ he said.

“It is all part of a careful balancing act between the demands of Catholic theology, and of conservative factions in the Vatican, and the reality of the English Roman Catholic Church, where several of the most prominent lay figures are either gay themselves, divorced, or married to divorced people. . . .

“In most countries, the Conservative wing of the Catholic church is more or less homophobic, but in England the Catholic Herald, which would be their paper, has been edited by an openly gay and partnered man (who died this month) and does not attack the bishops on that front. . . .

Fortunate Families Focus & LGBT Timeline Round Out U.S. Catholic Cover... Welcoming Wild Beasts and Angels As Part of Lent
%d bloggers like this:
Scroll to top