Spirits were high and the Spirit was moving at January 31st’s Prayer Breakfast and Lobby Day in Annapolis, Maryland, sponsored by Marylanders for Marriage Equality.  Dozens of religious leaders from across the state and across faiths gathered to show their support for the state’s marriage equality bill.

“This conviction flows from our Church’s social justice teaching. I feel sad that some Church leaders, including my own, claim that marriage must be between one man and one woman, that the definition of marriage has always been the same, and that it cannot change. This is simply not so. . . .

The Washington Blade report on the press conference following the prayer breakfast event highlights quotes extensively from the racially, ethnically, and religiously diverse group of church and congregation leaders who supported the state’s marriage equality bill, some noting the explicit religious protections that are included in the proposed law.

The Washington Post’s Maryland politics blog focused on the remarks of House Speaker Michael Busch, who was raised Catholic and who taught and coached at his high school alma mater, St. Mary’s in Annapolis.  While upbeat, positive, and enthusiastic through most of his talk, Busch also noted political reality, saying the he expects the vote in the House of Delegates to be “very, very close.” 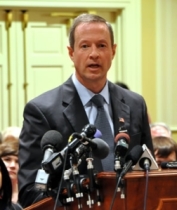 A highlight of the prayer breakfast, not mentioned in either report, was a surprise appearance by Governor Martin O’Malley, a Catholic, who strongly supports the marriage equality bill.  O’Malley later testified at the state’s Senate’s Judicial Proceedings Committee hearings on the bill.   The Washington Blade’s  report on the hearings quoted the part of O’Malley’s testimony concerned with religious liberty:

” ‘This bill balances an individual’s civil marriage rights with the important protections of religious freedoms for all,’ O’Malley continued. ‘And because it protects both of these inalienable rights, it is supported by a broad coalition of Marylanders, which includes clergy, community leaders, faith-based organizations, civil rights groups and those who hold the most important title of all in our democracy, and that title is citizen.’ “

The Washington Post carried an Associated Press story on the Senate hearings.