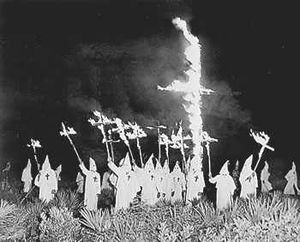 The Catholic hierarchy are starting to let their claws and teeth show.

Fox-TV News in Chicago reports today that Cardinal Francis George of Chicago has compared the gay liberation movement to the Ku Klux Klan.   A story and video of the interview is available on their website.

The Huffington Post report of this incident has the text of the Cardinal’s explanation of his analogy:

“You don’t want the gay liberation movement to morph into something like the Klu Klux Klan, demonstrating in the streets against Catholicism.”

When the Fox host pointed out that George’s comparison was “a little strong,” the cardinal stood by his statement.

This comes on the heels of last month’s statement by Archbishop Timothy Dolan of New York, where he said, in reference to lesbian and gay people:

The sheer ridiculousness and callousness of these comments show not only  ignorance of the LGBT movement, but also bespeak an irrational fear.

What else can account for such vicious responses?  Part of the fear may be due to the fact that the hierarchy senses they are losing the argument on LGBT equality.  I do not think that these men are evil.  I believe them to be motivated by good and trying to do good, but that pressure is getting  the best of them and making them act in irrational ways.  I am not excusing their behavior or statements at all, but I think it is important to understand what may be behind these statements.

Regardless of the motivation, an apology is needed in both cases.

I first learned of  Cardinal George’s  statement from our friends at the Unitarian Universalist website, www.standingonthesideoflove.org/blog.  I agree with their call to action:

“Get in touch with Cardinal George. Ask him to reconsider his comments and issue an apology. Above all else, approach this conversation with the greatest amount of love you can muster, lest we give credence to his beliefs that “the gay liberation movement” is full of angry hate-mongers. Our issue isn’t with Catholics — it’s with those leaders who use divisive, incendiary language and tactics to suppress an entire group of people and our families.

“You can leave a message for Cardinal George through his Facebook page: https://www.facebook.com/FrancisCardinalGeorgeOMI

Equally Blessed, the coalition of faithful Catholics who work for LGBT equality and justice (of which New Ways Ministry is a member), has released this statement in response to Cardinal George’s comment.

Catholics Are Not the Problem in Maryland—And Neither Are African-Ame...Ireland's Christmas Gift to New York's Couples
Scroll to top
%d bloggers like this: