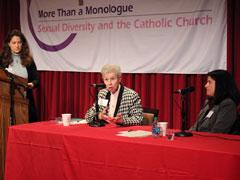 The “More Than A Monologue: Sexual Diversity and the Catholic Church” conference series ended with a program at Fairfield University entitled  “The Care of Souls:  Sexual Diversity, Celibacy, and Ministry.  The headline for an article in the National Catholic Reporter  explains the focus of this conference: “Homosexuality among church leaders discussed at Jesuit university event.”

New Ways Ministry co-founder Sister Jeannine Gramick, SL was a featured speaker, discussing the history and spirituality of lesbian nuns.   Her respondent was Jamie Manson, an NCR columnist, who will be a workshop speaker at New Ways Ministry’s Seventh National Symposium, March 15-17, 2012, in Baltimore.

In her response to Sr. Jeannine’s talk, Manson reflected on how the experience of church is different for lesbian women than it is for gay men:

” “For lesbians the experience of being Catholic affects more than their sexual orientation; it relates to the anatomy itself. By banning women from serving as priests, the hierarchy says — in this great cosmic hubris — that God simply cannot work sacramentally through the body of a woman. For most lesbians, and many straight women, this leads to feelings of isolation and disempowerment,’ Manson said. ‘I cannot stress enough how corrosive it is to the spirit to have never seen a woman’s bodily form wear a stole, stand behind an altar, raise the bread and wine, place her hands in the waters of the baptismal font, step through the center door of the confessional.’ ”

The More Than A Monologue series began with a conference at Fordham University, which featured another Symposium workshop speaker, Hilary Ranney-Howes, a transgender Catholic woman.  An NCR article on that event featured the following from Hilary’s talk there:

“Hilary Howes, a 56-year-old event designer and transgender activist from Washington, D.C., who said she was born “with male genitalia and a female brain,” talked about the unique position of transsexual people who are Catholic. Howes “transitioned to live as a woman” through a sex-change operation 16 years ago, and was baptized and confirmed as a Catholic eight years ago. “[I] remain in my Catholic marriage of 33 years, to the most understanding woman in the world — making ours one of the few same-sex marriages affirmed by the Roman Catholic church,” Howes continued, drawing laughs from the audience.”

Let’s hope that “More Than a Monologue” becomes more than a one-time series.  Our church needs more discussion, education, and debate on LGBT issues, especially when presented in such an informative and engaging manner.